"That was… no accident… I was drugged… with sleeping pills… I was murdered… by that person… That’s why… I took… my revenge… It’s only fair… isn’t it… Ini?"

The episode starts with this message, and a scene of a freak car accident.

We then cut to a conversation between Phoenix and Maya. Maya seems to be in trouble again. Maya admits to having killed someone... 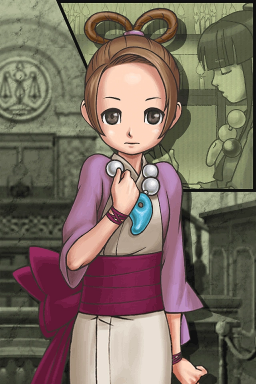 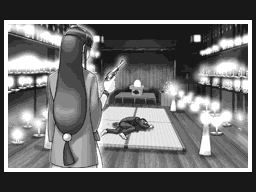 A defense attorney. You are reunited with Maya, only to have to defend her again. You were actually there when the murder occurred. Can you win against the young offspring of a feared prosecutor you faced several months back?

A young spirit medium in training. She is also your assistant. The murder occurred while Maya was channeling someone. Is it really her fault the victim was killed? She is referred to as "Mystic Maya" at her village.

Grey was a surgeon, and could be a jerk sometimes. He went to Kurain Village to speak with a late friend of his. He was killed during the channeling.

Franziska is the daughter of the feared Manfred von Karma. Like her father, she aims for only one thing throughout her life: perfection. So far in her five-year career, she has a perfect win record, thanks to her intelligence, aggressiveness, and her trusty whip. Let's see if you can break this perfect record.

Lotta dreams of being a photographic journalist. You first met Lotta several months back as a witness in one of your first cases; she is now a witness in this case.

Ini Miney is quite a ditz: sleeping almost all the time, being spacey, saying "like" in almost every sentence... Just why is she in Kurain Village in the first place?

Mia was your former boss and mentor, who was a highly experienced defense attorney. She was murdered early in your career. However, thanks to the incredible power her family holds, Mia can still aid you in desperate situations. Maya, being a spirit medium, is able to channel her whenever you urgently need help.

Gumshoe is an absent-minded detective, and can be short tempered at times. Usually, he is a friendly and helpful character.

Maya's younger cousin, and the daughter of Morgan. Despite her young age, she already is a powerful medium. Pearl is very shy and doesn't talk to strangers.

Maya's aunt, and Pearl's mother. She is the sister of Misty Fey, who won the position of Master over her. She watches over Maya in Misty's absence.

Ini Miney's older sister, and a former nurse, who died in a car accident sometime after an incident that killed 14 patients a year ago. This is the person Turner was trying to talk to when he was killed.

A nutty and perverted man who claims to be the director of the Hotti Clinic.

The founder of Kurain Village, and also the one who invented the channeling technique the family now possesses. There is a jar that is supposed to contain her spirit.