The Grand Prix event from the earlier episode makes a comeback, as a series of funny-looking characters slug it out to win the honor of "Hero of Heroes". The Steel Samurai theme plays, but an improved version of him, namely, the Nickel Samurai, takes the throne while beating his nearest rival, the Jammin' Ninja. 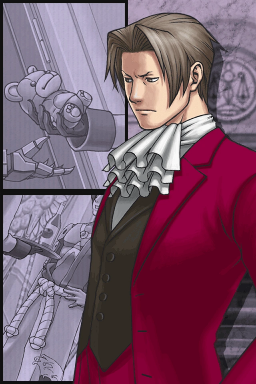 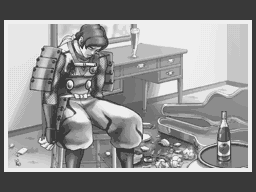 Phoenix Wright A defense attorney. Phoenix is forced to take this case. You'll see why later.

Matt Engarde A young man known as the Nickel Samurai. He works at Global Studios. He looks very trusting and contacts his managers all of the time.

Juan Corrida Engarde's arch-rival, who plays as the Jammin' Ninja at Worldwide Studios. He really loves bears and has a collection of every kind.

Miles Edgeworth Miles Edgeworth is thought to be dead since he left after few months since a case that he is a defendant of. Now he is back and different from before, well, slightly. The prosecution stand was meant for von Karma. Why didn't she take it?

Wendy Oldbag A grouchy old woman you met on your case with Will Powers. Oldbag once worked as the security lady from Global Studios. Now she works as a security lady at the Gatewater Hotel.

Adrian Andrews A rather lovely manager of Engarde. On the outside, she looks very strong and seems to live on her own. Not so much on the inside... She was the first to discover Corrida's body.

Will Powers Engarde isn't the first Samurai to be your client. Powers once worked with Global Studios as the Steel Samurai, until after a case you took last year.

Maya Fey A young spirit medium in training, and your assistant. She is a big fan of the Nickel Samurai. She is the reason you took this case, but it isn't what you think if you know her well.

Pearl Fey Maya's younger cousin and a friend of Phoenix. Pearl is quite new to the world outside her village, but she is learning. She cares for Maya's safety.

Mia Fey Phoenix's deceased chief and mentor and Maya's big sister, who, thanks to the Kurain Channeling Technique that Maya and Pearl hold, can still aid you despite death.

Franziska von Karma Franziska is the daughter of the feared Manfred von Karma. Like her father, she aims for one thing in her family's life, perfection. Von Karma had a perfect winning record, until you came along. She was originally the prosecutor for this case, but why is she replaced?

Dick Gumshoe Gumshoe is absent-minded detective and can be short tempered at times. Mostly he is a friendly and helpful character. He is afraid of Von Karma, who can track him down with a radar. He was well aware that Edgeworth is still alive.

Lotta Hart Lotta dreams to be a photographic journalist. She was at the Gatewater Hotel at the time of the crime.

Shelly de Killer A professional assassin who leaves his signature card behind to indicate he was here. He trusts anyone who trusts him.

Celeste Inpax A former manager who committed suicide 2 years ago.

Director Hotti A nutty and perverted man who claims to be a doctor at the Hotti clinic.

John Doe A man who claims to be Engarde's Butler.