From StrategyWiki, the video game walkthrough and strategy guide wiki
< The Dog Island
Jump to navigation Jump to search

Wild areas are areas outside of towns and villages where there may possibly be dangers to look out for, such as Enemies or terrain features like sliding sand or bottomless pits. The wilds are also places where you will find the items from Collector books, such as flowers, food, fish or bugs. Wild areas generally have few if any other dogs and for the most part don't have ways to rest or save like you can in towns. Whenever you are out in the wild areas, keep an eye out for how close you get to the enemies and try sniffing around to find any food or flowers. You may also be able to dig up Special Items before getting a mission to find them. If that's the case, when you do receive the mission you don't have to go anywhere; you'll just hand over the item at that time.

This page lists the areas in the order in which you go to them, so to avoid spoilers in the game, just don't scroll down past where you currently are. Only Gola Highlands, West Chilly Field and Rune Canyon can be warped to directly with Boris, so in most cases you will have go to the closest town first. 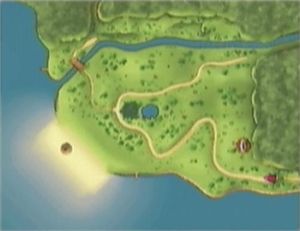 Green Meadows is a grassy, somewhat hilly place with a beach. At the beginning of the game, this is where you go to meet Yi Lu, who can teach you to sniff. It's also home to Bill, the former leader of the Victory Gang dogs, who can give you advice on how to stop their pranks. Isaki and his wife Sayori live here too, down at the beach. There is a broken bridge blocking the path to Gola Highlands, but Goliath can fix that. There is a lot to do in the Green Meadows, as it has very diverse wildlife, three fishing piers, lots of bugs and eventually even a circus and a doorway to mystical land. This is also the only place to catch Marlin. 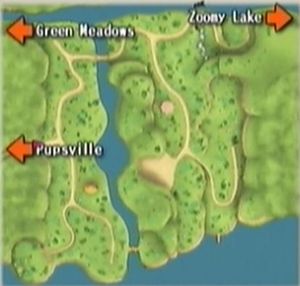 The place with the most trees (as you might have guessed) and a few Gorillas. Obaba, the healer, also lives here and Goliath the lumberjack can help if something needs fixing (or you want to get by that big log blocking the path to Zoomy Lake). Once it has been constructed, you can use a shortcut to get back to Pupsville. Treely Woods is also home to the most bug locations of any area on the island. 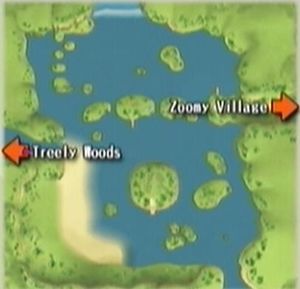 This is a large lake at the south end of the island, where you can find plenty of dragonflies. Just try and avoid the Alligators while swimming around, and try to find some Hippo Food if you need to cross a gap to get somewhere. There is also a grave on the biggest island, right in the middle of the lake. It doesn't happen to be from anyone you know, but to a certain doctor, its a memory. 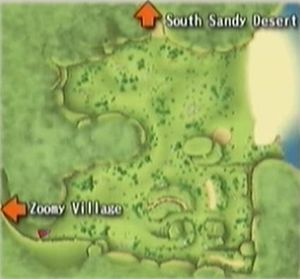 Hoya Plains has it all. Bugs, fish, trees, Elephants, Giraffes... It even has a mob of angry bees which you must get rid of if you want to get to the South Sandy Desert. You can fish for Yellowtail Kingfish (and a lot of other fishy things) or help your friends by finding a Map Stone to help Boris with his sence of direction, find the vase Rode wants or a flower to drive those bees away from a Chihuahua who is having some trouble. 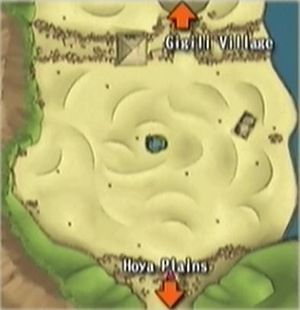 Here you need to drink often and avoid the poisonous snakes (so carry some of Obaba's Antidote). You can see the pyramid or talk to the Sphinx when you need to do a test. Sniff around cacti and glowing things, but don't stay out for too long without getting a drink at the oasis! 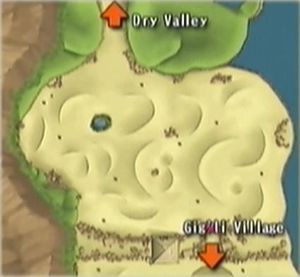 When you first come here, there's one thing you will notice right away: the constant sandstorm. So finding some wood from the Ash Tree is easier said than done. Remember to watch out for quicksand holes which suck you up and spit you out of the pyramid. After a while though, you'll meet a dog who can help you get rid of the sandstorm and unblock the way to Dry Valley. 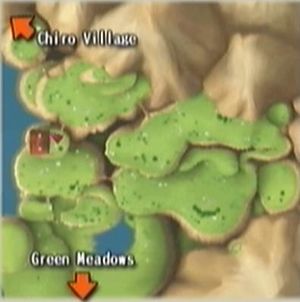 High in this mountainous region lives the greatest sniff instructor in the land, Tao. His dojo can be found up on the highest cliff and, if you are good at learning scents and helping dogs, he can teach you to become a Grand Sniff Master. You'll have to find a way to unblock the bridge to Chiro Village, but gravity is on your side. With Bears, Gorillas, Snakes, Elephants and Giraffes, the Highlands are teeming with wildlife. Be sure to check out any caves if you're looking for Elephant Food.

The Chiro Caves are filled with danger. You'll need an Obaba's Antidote to survive the poisonous snakes. You should also avoid bats when you go through, and be careful when you look for the Heavy Stones. You'll see Henry, but only until you find the Heavy Stones. After this, you'll be in the West Chilly Fields, so bring a Hot Drink just in case. The cave has a lot of water also, even though the folk at the Chiro Village are looking for water underground, hinting that the water is bad. 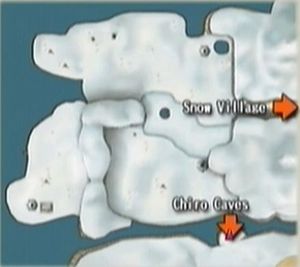 Despite being cold enough to freeze a river, there are a few houses in the area. You only have to worry about Polar Bears here, so make sure you don't run near them. You can find igloos and houses, but none of them can be entered. If you're spending a lot of time looking for things for dogs, spend a good amount of time in the hot springs. You can stay in until your temperature meter turns completely pink to double the normal amount of time you can spend out in the cold. 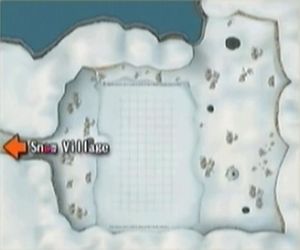 This place is much like its partner to the west, with structures you can't enter, hot springs and roaming Polar Bears. Something new is a dangerous ice floe, across which you can only take certain paths. Bark at the penguin to startle him into running across the ice, then be careful to follow his route exactly. Any misstep and you'll find yourself back on the west side of the ice field. Don't worry about remembering the route for the way back; you can take the ledge that runs along the north wall. 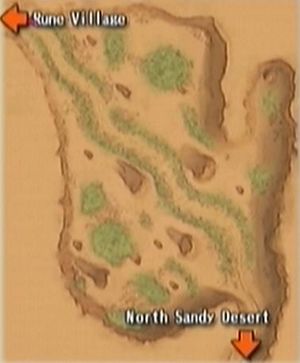 Dry Valley doesn't have much vegetation to speak of, and the critters here are especially nasty. There is only one path right through the middle of the area that is guarded by a buffalo. Although you are tempted to go deeper into the sides, be careful of the second buffalo, who doesn't show up until you're already fairly close to it. 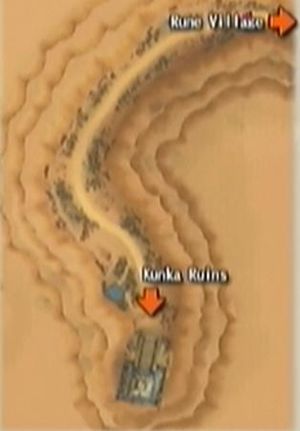 This is the way to Kunka Ruins and it is patrolled by a bunch of Buffalo down its entire length, so be careful. Boris won't show up here until after you've opened the door inside, so until then you'll have to run back and forth. If you're heading into the Ruins, try taking an Ancient Fish from the pond outside for good luck.

This is a tiny area whose only purpose is to stop you from accessing the Ancient Grove until you obtain the Sniff Master Medal. The Gray Cobra in here is especially volatile, so be careful when you try to get around him. Although you can see fish swimming around in the pool behind the statue, there's no pier, so you can't find out what's in there.

This is the mysterious spot you search for throughout the game. It's here that the Legendary Flower grows, if you can find it. This place is like a garden and you can find every kind of flower here. There are no enemies to worry about, too.

Kunka Ruins is a mysterious temple-like structure at the end of Rune Canyon. You are sent here twice in the game, once by Tao to retrieve the Sniff Master Medal, and again by the Anc Queen to find the Stone of the Heavens. The Ruins are guarded by plenty of Cobras, and you'll find the inside to be a maze of rooms, doors and hallways. Many times to progress, you'll have to search out switches to open doors or place different items on pedestals to activate them. It's always a good idea to bring an Ancient Fish to Kunka Ruins to be used as an offering for passage. Deep within the Ruins lies a fearsome monster guarding the final item you need before using the Legendary Flower on your sibling.

At some point you'll need to travel to the Land of the Ancs to get help with your mission to cure your sibling. Petasi can get you to Anc Road, but it's up to you to make your way through to the Queen. It's a circuitous route, relying heavily on teleporting from place to place. You'll need to solve puzzles along the way to open up the teleporters, but in the end you'll be rewarded with an audience with the Queen. Make sure you've done everything you want to before entering the giant tree in Green Meadows, as this is the point of no return in the game where you no longer have access to the rest of the island, unable to complete collector's books, purchase accessories, play mini games, or complete optional missions for the rest of the game. After you complete the Anc Road, you go to the Kunka Ruins again for the final challenge.