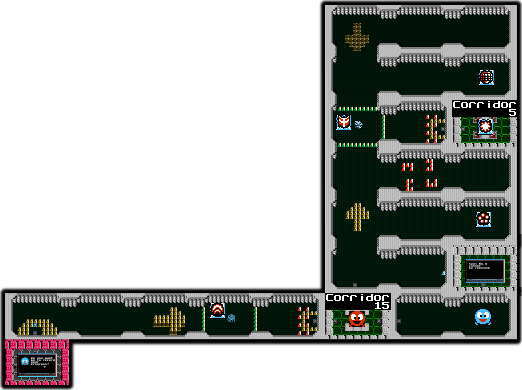 Start - X16 Y9
Once again, the area conveniently starts out with a Blue Lander check point. Open the door above and proceed east down the path into the area.
X19 Y8 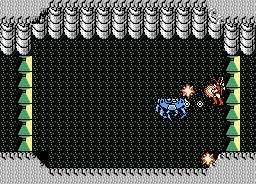 Very early into this area, you will be faced with the first mini-boss. Once again, it is the walking dome that has terrorized you many times in the past. At this point in the game, defeating it should be a relatively simple matter. Your fully upgraded Multi-Bullet weapon will do substantial damage to it in a small amount of time, but it will drain quite a few of your chips. Defeat it and open the item capsule in the center and you will find the first upgrade to the Wave Attack weapon.

X20 Y8
Beyond the door to the right is the entrance to Corridor 15. However, before you jump right into it, continue across to the following door on the right, and follow the path to the end.
X23 Y8

When you reach the end of the path, you will be in a room with a few bouncing orange balls, along with two hard to destroy black orbs. Clear away the bouncing balls and shoot the item capsule in the middle to obtain a Blue Lander and extend your health meter by one. Now return to the entrance to Corridor 15.
X21 Y8

After collecting the extra Blue Lander, you're ready to head inside the next Corridor. Jump in and clear it out to receive a Red Lander upon your return. This will boost you chip maximum from 400 to 800. You won't receive a new pattern of fire yet, but you will be able to afford the next Repeller upgrade from Area 0 for 500 chips.

You've left the forest region of Naju and are now exploring the Underground portion which contains a few new enemies. Small orange crystals will materialize in mid-air for a while, and when they are fully formed, they will fly in the direction of the Guardian. Do your best to shoot them or dodge them. Orange spinning diamonds from Corridor 0 will make their return here. Next is a particularly lethal kind of attack ship. They drop down and begin firing lasers at you as they retreat. Their lasers can do quite a bit of damage. If you can't destroy them on their way down, then stay away from their line of fire.

Next to appear are a set of blue crystals that materialize. Instead of darting toward you in one direction though, they slowly follow you around. Lure them to the top of the screen and then swing around below them and blast them with the Multi-Bullet weapon. You will fly over what looks like a volcano. Only, instead of lava, it spews little green crystals. You can destroy the crystals, but you can stop the attack altogether by blasting the mouth of the volcano. A single new enemy will appear, a pinwheel that scatters bullets to the bottom of the screen. Then the small orange crystals will return, joined by the familiar blue orbs. Spinning blue ships will appear as well. 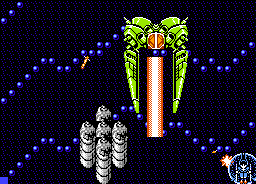 The action will slow down with green asteroids and red spinning ships. This will occur for a while uninterrupted. After it stops, you will fly over three volcanoes. Shoot the crystals they release, and shoot the mouths if you can get underneath them in time. Then the boss will appear.

The boss is a green Clawbot. Other than the color, it's not terribly different from the Silver one you fought in Corridor 14. Use the same strategy to take it down, focusing your attack with your main guns and either the Fireball, or the powered up Multi-Bullet. When the lower portion drops off, lead the ship by attacking it from the side until it explodes. Return to Area 5 and collect the Red Lander reward that awaits you. Then head through the door at the top.

X21 Y7
Destroy the fast moving red four-legged machines, and then continue on by venturing east first.
X22 Y7
Take care of the shellfish and two bouncing green balls, and then open the door to the right. Enter the next room, and you will receive a hint on how to open the gate to Corridor 5. Then return to the west, and proceed north.
X21 Y6
Ignore the upward arrow, and investigate the path to the east.
X23 Y6

Take out the three orange bats that occupy this room. Then shoot the item capsule in the center of the room, and you will receive the Bullet Shield tile that will upgrade this special weapon to Level 2, and make it a bit more useful. Walk all the way back to the west and proceed north again.
X21 Y5
An interesting new enemy appears here. What appears to be a block of ice is accompanied by three blue versions of the small darting creatures that usually leave item capsules behind. Only, the block of ice isn't what it appears. These blocks quickly multiply into many different colored versions of themselves, and they are all indestructible. They will not directly chase the Guardian, but they will take over a good portion of the floor rather quickly. Don't stick around for too long. Instead, continue north this time, as there is little of interest to the east.
X21 Y4 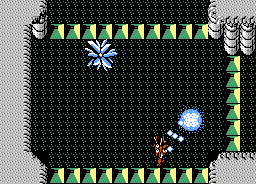 It's time for another mini-boss fight. This is a new boss, and it's quite tough. It appears like a jagged crystalline structure. It chases you about the room much like the domed mini-boss, and it can move quite fast. In addition, it can send small crystals chasing after you that fly around the room at even faster speeds. This mini-boss does have two limitations. It can't move diagonally, and once it starts moving horizontally or vertically, it will continue to do so for a while before switching. On top of that, it has to stop moving every now and then, giving you more of a chance to put some distance between you. Fire on it as frequently as possible without sticking around for too long to leave yourself vulnerable to collision. Once you defeat it, you will earn a defense upgrade from the item capsule that appears in the middle of the room. The entrance to Corridor 5 is to the east, but before you head there, investigate to the north.
X21 Y3
Take out this familiar collection of enemies, and then explore the path to the east. There is nothing of interest to the north of here.
X23 Y3

In this room, you will find the same mix of enemies found earlier; the small blue darting creatures and the quickly multiplying ice blocks. Because of the blocks, don't waste any time here. Go directly to the item capsule near the middle and blast it open to find an upgrade to your grenade weapon. Once you have this, return to the room of the second mini-boss, and head east to find Corridor 5.
X23 Y4

When you arrive here, you must determine how to open the next gate. If you received the hint for this Area, it told you to "shoot into the corridor." However, the gate is closed, so the corridor is not exposed. The hint is actually referring to the sign above the gate, which reads "Corridor 5": in other words, to shoot into the word "Corridor". Shoot at the sign for a few seconds, and sure enough the gate will open. Jump in to tackle the next Corridor. When you return, you will earn a set of 20 Enemy Erasers. Be sure to save these useful weapons up for more difficult corridors to come.

In this white underground corridor, you will be assaulted by a steady stream of falling green asteroids. After a while, they are joined by the circle forming asteroids that change color and chase you. They will continue as the green asteroids trail off. A set of slowly chasing blue crystals will materialize for a while, and they are later joined by the spinning orange diamonds. 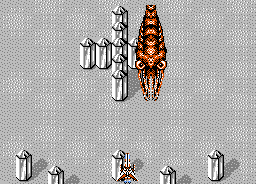 The boss of this corridor is a very large squid-looking monster known as Zibzub. It may remind you a bit of Crawdaddy, but it's a lot more active. It bounces up and down along the bottom of the screen, where you are likely to occupy. It fires smaller squids from it's mouth, and tries to aim for your lateral position on the screen. If you have full health when you arrive at this boss, then you shouldn't have too much to worry about. Stay in one location on the bottom of the screen and continue to fire up with your main guns and the Multi-Bullet, Wave Attack, or Fireball weapon until Zibzub is defeated.

If you are low on health, you may need to weave around a bit more in order to dodge Zibzubs attacks. Fly beneath him as he jumps over you. Defeated small squids may drop item capsules to help you recover health. Once it's defeated, you will fly back to Area 5, collected another pack of Enemy Erasers, and return to Area 0. The entrance to Area 6 can be found at X15 Y11.