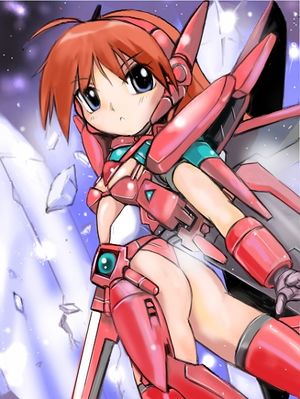 You control the Guardian throughout her mission to rescue planet Earth by initiating Naju's self destruct sequence. The Guardian's exact nature is unknown, but she resembles a robot with a female physical appearance, possibly a cyborg. She is capable of transforming into, and from, a space craft by folding her body up in a specific sequence. She does this automatically when transferring between the labyrinth that she must walk around to explore, and the long corridors that she must fly through.

Famicom note: According to the instruction manual, the Guardian, named "System D.P.", nicknamed "Miria (ミリア, Miria?)", is made of extra-terrestrial technology.

The Guardian begins the game with low levels of health, attack power, shields, and maximum chip capacity. All of these aspects can be improved throughout the game by defeating particular enemies and discovering item locations. Her health is visible at the bottom of the screen, in the form of a blue bar. The Guardian's maximum health can be increased in two ways. You can collect Blue Lander tiles which automatically increase the meter by one unit. You can also increase her health by achieving particular scores, the first of which occurs at 30,000 points. Current health levels can be improved by collecting chips, hearts, or energy tanks. The Guardian's health is reduced whenever she is struck by an enemy or one of their projectiles. If her health is reduced to nothing, she will be defeated after taking one more hit, and the game will end. When the game ends, you may continue from the last location where you were offered a password. If you wish to end your game without losing your progress, be sure to write down these passwords so you may continue at a later time.

The Guardian begins the game with her standard weapon and no special weapons. Special weapons may be found and collected throughout the game, but they may only be fired if she has enough chips to power the weapons. Each weapon requires a different amount of chips per shots fired. Weapons may also be upgraded by collecting or purchasing multiple instances of them. Upgraded weapons typically increase the size or speed of the shots fired. In addition to fueling special weapons, chips serve two other purposes. They may be used as currency when buying items or weapons from Blue Landers. They also determine the efficiency of the Guardian's standard weapon. When she possesses more chips, her main gun spreads out more and can strike enemies with greater ease. Chips do not make her main gun stronger, however. Attack tiles must be collected in order to improve the Guardian's offensive capabilities. Your maximum chip capacity is improved by collecting Red Lander tiles.

During the game, press

to toggle back and forth between the action and your sub-screen. When viewing the sub-screen, the action will pause until you return to it. The sub-screen shows several vital pieces of information, including, but not limited to: 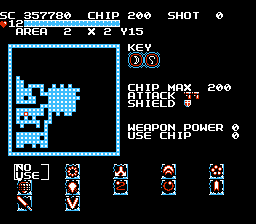 Note that when the sub-screen is hidden, and the action is being displayed, the first four items in the list are displayed at the bottom of the screen. You may use the direction pad in the sub-screen to select which special weapon you would like to activate.