The Legend of Zelda: Spirit Tracks/Charging into Darkness

Now that you've comandeered the Compass of Light, you have opened the path to the Dark Realm. This final section of Spirit Tracks lies far southwest in the Forest Realm. Load up on health, and trace a path to the portal when you are ready to confront Chancellor Cole and Malladus once and for all.

The path leads into a tunnel with several Tekitites, so be on guard as you head on through. Eventually, you'll come across a bridge that leads over to a secluded island, with a shrine of evil on it. This shrine has a dark black portal leading into the Dark Realm. Prepare for your final battles... 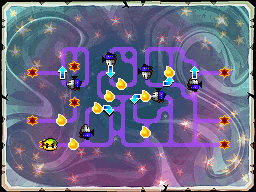 Drive through the Tears of Light, then into the Armoured Trains to defeat them!

You'll enter the Dark Realm on a set of heavily guarded tracks, moving much faster than normal. Six Armored Trains scour these tracks, waiting to take you down. However, Tears of Light also appear throughout this area. Trace your path over to these. Grabbing them will make your train invincible. Pull your whistle, and you'll be in for a surprise: you'll rocket across the tracks, even in reverse, and any Armored Trains in your way will be pulverized! Be careful, as a collision with one without the Tears of Light spells doom!

There are also six portals in this area. Each one will take you to a set of tracks on the same line as another portal. Use your train-driving skills to take out as many Armored Trains as you can. When you get down to the last one, it will try to be a weasel and sneak off to protect itself, or come right after you. When this one's defeated, you'll open the way to Chancellor Cole and Malladus, but now you have the Demon Train in your way, and he's ready to take you down!

The malevolent Demon Train is so big, he takes up two tracks in this area. He has three cars, himself included, that bring more than a fair share of pain.

You must now take down the Demon Train one car at a time, and hurry, or you'll run out of tracks. Don't speed up, or you'll get hurt crashing into the train cars. Slow down and prepare for battle.

The first car has five hatches full of exploding barrels that drop onto the tracks. As a hatch opens to drop a barrel, hit the barrel with a cannonball to blow out the hatch. Do this to the others to subdue this train car and move on to the next area. Watch out, as the Demon Train is vicious and switches tracks often. A sound of his ghostly whistle warns you to get out of the way. He'll also brake, hoping you'll crash into him. If you need health, smash the skulls on the tracksides.

The next car is more fortified and has four laser cannons mounted inside, waiting to fire on you. If that wasn't bad enough, flames are scattered on the tracks, and they will scorch your train, forcing you to get out of the way. Wait for a hatch to open, and fire on the cannon. Two hits will destroy each one. With all four destroyed, this car will be put out of commision. Now to tackle the Demon Train himself.

This is your hardest challenge yet. The Demon Train has several rotating lasers on his sides, which will fry your train if they strike it. As he gears up to fire, the Demon Train will lock the lasers into place. Fire on all the cannons in your sights. When all are knocked down, speed up to full gear and fire on the Demon Train's face. After a few hits, he'll charge after you, so switch tracks quickly! Now, repeat the process again. He'll slow down some more and leave himself vulnerable. This time, fire without mercy as he comes up on you. With enough hits, the Demon Train will be stopped in his path.

You are now inches away from a battle with Chancellor Cole and Malladus...

Spoiler
With the Demon Train stopped, it's time to climb on and face Cole and Malladus themselves. Anjean offers to join Link and Zelda in the final battle. But Staven/Byrne stops her and says It's my turn now, Master. But Link and Zelda disagree, and tell both of them to stay put and rest. They are too injured to help. So all that Anjean can do is summon a Phantom's body for Zelda to possess. Zelda has one last, personal, question for Link: What will you do when this is over? Answer it as you, the player, wish, as it affects the ending slightly. After this, it's time for Link and Zelda to climb onto the Demon Train and face Malladus and Cole... Cole stands at the head of the Demon Train. He sighs, calling Link and Zelda 'nuisances', and 'insolent'. The Demon Train starts again, and leaves behind the Spirit Train. Malladus' resurrection is now fully complete! This is it, it's time to battle!

What you must do is help Zelda reach the head of the Demon Train where Malladus stands. There, she can grab him and allow you to strike with a Light Arrow. Do this slowly. Start by drawing a short path for Zelda. Cole will summon four demonic rats that will try to attack Zelda. You must defeat these, or they will possess Zelda, allowing Cole to control her like a puppet. If this happens, use the Boomerang to cut the cords. Follow behind Zelda, destroying the rats that Cole summons. About halfway up the train, Malladus will start to shoot lasers at you. Follow behind Zelda, continuing your paths and destroying the rats that now come directly from Cole himself. Near the head of the train, the sections will start to move. Just continue as before. At the head, you must get Zelda to grab Malladus. Once she is holding him, you must shoot him with a Light Arrow. They will start to hover above the head. Wait for Zelda to face Malladus towards you, and shoot!

Spoiler
Cole will fly away in fear. Malladus tries to escape, but Zelda's grip is too tight. Zelda tells Link to escape, but he tries to help Zelda. The power of light destroys the Demon Train, and everyone is sent crashing back to the island where the portal to the Dark Realm once stood. Link awakens on the ground. Zelda is beside him, but sees her body floating. Her body expels Malladus' spirit! This is Zelda's opportunity to reclaim her body! She flies to it as fast as possible, but flies... straight through? Cole urges Malladus to reclaim Zelda's body, and he flies towards it. Just as it seems all is lost, Malladus stops suddenly in midair. Staven/Byrne is using the last of his power to protect Zelda. She cannot give up now, he tells her. Her body has the sacred power of the Spirits, and if she concentrates, she can reclaim her body. Zelda prays to Tetra, and hovers towards her body... Zelda falls from the sky. Link runs to save her, but she falls on top of him. Zelda has returned to her body, and is overjoyed. She hugs Link, but this moment is interrupted by Malladus, who obliterates Staven/Byrne! Cole congratulates Malladus, and tells him to kill Link, and capture Zelda. But Malladus has had enough of Cole's incompetence, and instead uses Cole as his vessel. The two bodies merge, and form a massive beast. Cole's body is unwilling to host Malladus' spirit, and so Malladus does not have much time left. But he vows to destroy the world in the little time he has left!

Zelda will try to channel the sacred power of her bloodline. While she does this, you must defend her from Malladus. He is invincible, so all you can do is destroy the fiery boulders he spits at you. No weapons except your sword will work on these. To destroy the four that come at once, use the Spin Attack. After the two rounds of four-at-once in a row, Zelda will be ready. It's time for one last song on the Spirit Pipes.

You have no time to practise, it's straight into the real thing. Zelda will sing, while you play the Spirit Pipes. She will sing your line twice, then continue into the full song. When you play it successfully, the five Lokomo Guardians will join in. After the song is over, a target will appear on Malladus' back. You must distract him, and when Zelda sees an opportunity, she will strike with a Light Arrow. Get Zelda to go behind Malladus. Stand opposite to her, and attack Malladus with the sword. It won't damage him, but it will distract him enough, so that Zelda can strike. Zelda's view will be shown on the top screen, and when you see a golden star on Malladus' back, that's your chance to attack. Tap the arrow icon on the bottom of the touch screen to get Zelda to fire. You need to do this three times. Zelda and Link's health is as one, so try not to let her get hurt either. After the third arrow, Malladus will fall to the ground. Attack his horns. After seven hits, one will break off. He will get up and spit three fireballs at you. Now you need to repeat this process again, but Malladus will adapt and become faster. When the second horn is broken, you need to avoid five fireballs, then strike with one more arrow. The ruby on his forehead, his true weak spot, will be revealed. You must strike it. Rub the touch screen to push the blade in. Zelda will run over and help to finish it. Once the sword has been pushed in all the way, the ruby will shatter, and Malladus will be destroyed in a flash of light, gone once and for all.

Spoiler
With Malladus destroyed forever, peace finally returns to Hyrule. However, Zelda and Link still lament over the actions Byrne took, and are forced to tell Anjean what happened. Fortunately, Anjean reveals that her people don't die so easily, and suddenly makes a glowing blue sphere appear in front of them. She explains that Byrne has reverted to spirit form and will be reborn some time in the future, without any memory of these events. After watching Link and Zelda defeat Malladus, she has decided to leave the world in their care. She bids farewell, turning into spirit form herself, and leaves for the heavens with Byrne and the rest of the Lokomos.

Watching quietly from below, Link and Zelda find themselves compelled to hold hands, knowing they've become more than friends.

The credits will then roll, showing in order:

The last picture will be a drawing of Zelda having adventures with Link in spirit form, which happens to be drawn by Zelda herself, sitting at her desk with her teacher. Depending on what you chose to do after the final battle, you'll get a different ending:

Dunno: The least preferred of the endings. Zelda sighs longingly, thinking about Link, with no sign of him anywhere.

Warrior: Zelda hears Link sparring outside and catches his attention. However, she distracts him, and he takes a hit. Zelda laughs sheepishly.

Engineer: The preferred ending. Zelda suddenly hears Link's train whistle (different depending on the engine you have) and rushes to the window. She laughs and waves as she watches her best friend go by.