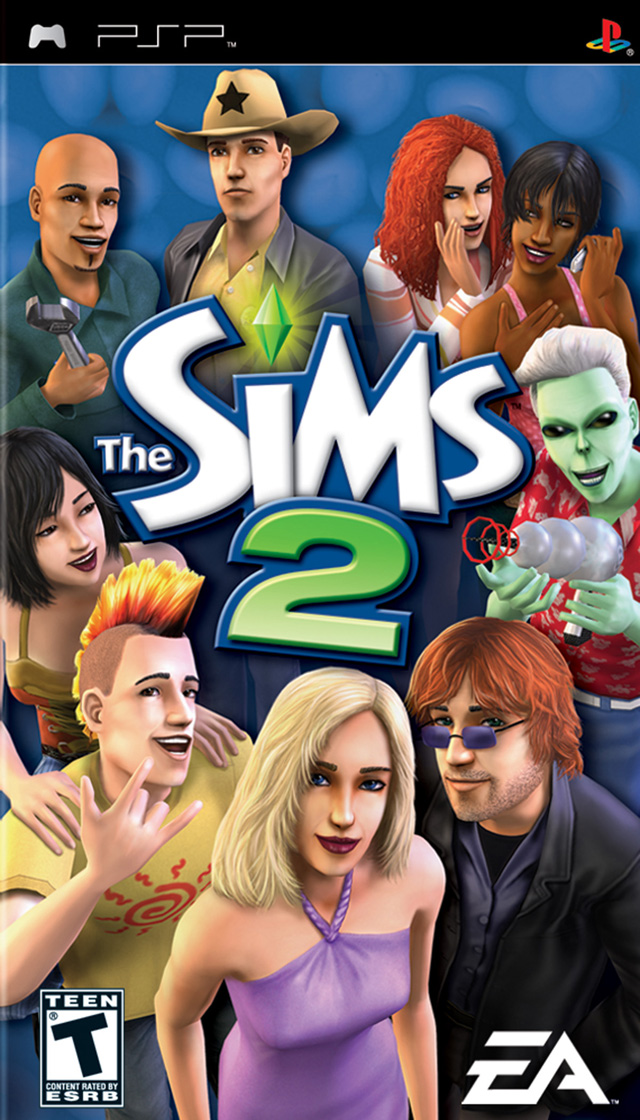 The Sims 2 is the first title in The Sims for the PlayStation Portable. The Sims 2 was released for the PC in 2004 and other consoles including the PSP later in 2005.

The game begins with the player's character driving through the Strangetown desert, presumably 'Road to Nowhere' in their car, when suddenly a flying green diamond (the marker and logo of the Sims game) flies towards the player and causes them to lose control and damage their car. Fortunately, the player finds a gas station. The player takes their car into the garage. At that point the player takes control. The player is introduced to a vehicle mechanic named Oscar, who after a brief tutorial in teaching the player how to talk to NPC Sims, informs the player their car will only take a short while to fix.

The player is then free to roam around the gas station, and after being introduced to some more NPCs, including Bella Goth, who claims to be abducted by aliens, completing tasks and being taught the basic objective of the game which is 'Secret Hunting' for the store clerk. The player then exits the shop only to find the garage around the back has completely disappeared along with Oscar and their car, with only the foundation of the garage remaining.

The player informs Police Deputy Duncan about the situation who replies that he can do nothing about it and suggests the player find a place to stay. After having bought Bella's house for pocket change and getting donuts for Deputy Duncan (which happen to have been found in the trash), the player finally gets a lift into Strangetown's Paradise Place, only to find more tasks and mysteries.

It is finally known that the Green Diamond appearing throughout the game is a mind-controlling device controlled by an "outside force"(the player). The main antagonist also realize that the protagonist really is a protagonist controlled by another outside force, just like playing a game. It is unknown if the Green Diamond's role applies to the other Sims games.(Note that the ending contains a lot of Fourth Wall breaking)

The gameplay is rather that of a 3rd person adventure game. The player controls their avatar's movement with all of the elements of exploring, collecting items, and talking to NPCs. A short minigame which uses a new timing-based speech scenario that requires the player to match the abstract icons that accompany your neighbors' enthusiastic "Simlish" gibberish speech will allow the player to advance in relationships and uncover secrets and mysteries that are used to advance through the game.

There are also several changes from the PC version; Sims can no longer have babies and they do not age. There are less ways for Sims to die, and returning to life is also always a perfect resurrection (there is no longer a chance that Sims will turn into zombies when returning to life).