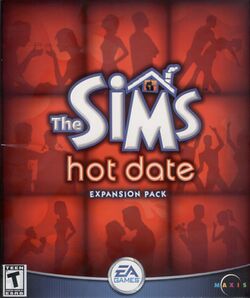 The Sims: Hot Date is the third expansion pack released for the strategy/simulation computer game The Sims. Hot Date is one of the most important expansion packs of The Sims, because it allows Sims to leave their homes and travel to a new destination called "Downtown" for the first time - a way of going out with a sim to have dinner with him/her and even dance outside of your sim's boring old home. All of the following expansion packs for The Sims have added new destinations, such as Vacation Island, Old Town, Studio Town, and Magic Town. It is reportedly the inspiration for The Sims 2: Nightlife, the second expansion pack to the sequel of the game.

New NPCs include townies, waiters and waitresses, a guitar player, and Mrs. Crumplebottom. The townies are just like regular Sims who only appear on Downtown lots. Unlike player-controlled Sims, these characters do not live in houses.

As with all expansion packs in the series, Hot Date included many new furnishing objects, clothing items, and Sim faces. However, the main feature was the new environment, called Downtown. Hot Date was the first in the series to allow Sims to be controllable outside their own homes. Downtown, Sims were able to go shopping at various stores, use restaurants, and meet new Sims (called "townies"), among other things.