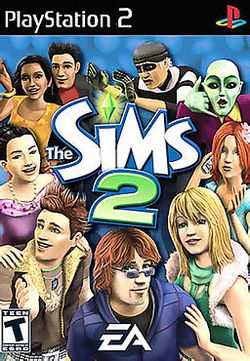 The Sims 2 is the fourth title in The Sims console series. The Sims 2 was released for the PlayStation 2, Xbox, Nintendo GameCube, Nintendo DS, Game Boy Advance, PSP, and mobile phones in the fourth quarter of 2005. Like The Sims Bustin' Out, Sims can get out of the house to visit other locations such as HMS Amore or Sunset Canyon. There are two modes. Story Mode, which has mission-based gameplay, and Freeplay Mode, which is open-ended gameplay very much like the original The Sims.

There are various locations to which Sims may travel throughout the course of the game. As a Sim advances through the game, new locations will become available. There are eight main and four small locations in Story Mode and four others in Free Play Mode.

The game features music performed by Paramore, Ryan Ferguson, Trivium and more recording artists (all songs recorded in the Sims language "Simlish"). The Humble Brothers donated heavily to the game.