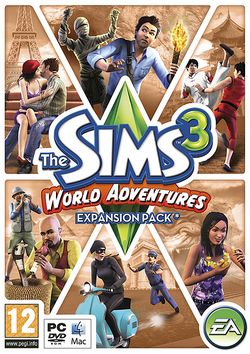 The Sims 3: World Adventures is the first expansion pack for the strategic life simulation computer game The Sims 3. The game was announced on The Sims 3 website in August 2009, with a North American release scheduled for November 17, 2009, to coincide with the release of Need for Speed: Nitro. The expansion pack focuses on traveling to three different areas as The Sims: Vacation and The Sims 2: Bon Voyage did previously, but a new twist focuses on adventures over simple family vacations. At these new Sim-inspired destinations found in China, Egypt, and France, Sims can meet Sims of different nationalities, hunt for treasure, and learn new skills.

For the first time in any Sims game, players are be able to take their Sims to landmarks in whole new countries. Sims are able to hunt for hidden treasure and display those newly found artifacts in their homes. New skills, such as Photography, and personality traits are to be included, as well as new rewards for Sims who succeed in challenges. Players are able to take their Sims to explore ancient tombs in Egypt, master martial arts in China, and discover and enjoy making nectar (the non-alcoholic Sims 3 equivalent to wine) in France. Sims from the included locations will feature in the game and Sims are able to share cultures and traditions, another first in a Sims game. Another feature mentioned is visa points, which determine how long you may stay on your vacation. If you get enough visa points, you can purchase a vacation home (which is an improvement from the camping area you get first).