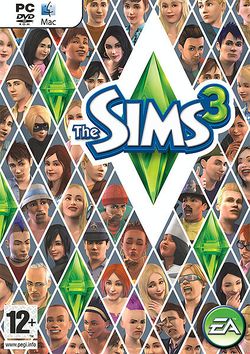 The Sims 3 is a strategic life simulation computer game for Windows and Mac OS X. It is a sequel to the highly popular and critically acclaimed The Sims and The Sims 2. It was announced in an interview by EA in November 2006, where it was also mentioned that the release date of the game would likely be in the "fiscal 2009" year. The Sims 3 was later released for consoles on November 9, 2010.

The Neighbourhood in The Sims 3 is seamless. Every lot and sim is loaded simultaneously. Every Sim in the town will age at the same time. The game ships with one neighbourhood with a stroyline set before the first game. Players are able to make their own neighbourhoods and share them. As in previous titles, the neighbourhood can be edited. There are around 90 different lots including bookstores, bistros, graveyards, parks, spas, grocery shops, art galleries and city halls.

Players have greater customization tools in The Sims 3. Weight is now gradual and specific items of clothing, such as shoes, can now be chosen separately. In addition a Create-A-Twin tool lets you copy sims that you've created.Keep in mind that multiple different clothing options will become available as you complete 'challenges' (a sub-achievement incentive) throughout the game. For example, career clothing and different hairstyles may be unlocked through this. Furthermore, the style editor in the create a sim will allow you to alter colors and textures of any item you choose.

Instead of the personality bars form The Sims 1 and The Sims 2, sims can now select up to five traits, depending on age, from a choice of over 60. These traits will unlock new interactions such as stealing candy from a baby. The wants system has been replaced with a wishes system which will allow players to unlock rewards for their sims. The moodbar has been replaced with a moodlets system that covers anything from getting fired to simply living in a beautiful house. There are only six needs in the game compared to the original eight. As in The Sims 2, sims have age groups. However, players have the option to set the lifespan from 25 to 1000 sim days.

Build Mode has been expanded with even more powerful Build Mode tools. When players adjust the size of a room. Every object in that room now moves and scales itself according to the size of the scale.

Despite keeping traits and wishes, the sims aren't able to age and is limited to certain important jobs. All you can really make is adult sims and is usually free to go anywhere. Also after choosing your job, you'll automatically go depending on the schedule. Sometimes there is opportunities for you to complete before the time expires. And there are times when you have to pick between two jobs in the middle of the career of your choosing. The only good news is your sim isn't really going to die depending on the handheld version.