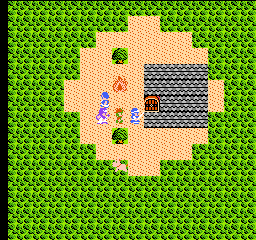 The lone building of Wellgarth

Wellgarth lies on the peninsula that juts out south of the large mountainous continent known as Rhone. You can only approach it by boat from the south. One easy way to find it is to sail due north above Cannock Castle. Another way to find it is to sail north of Zahan until it is out of sight, and then sail west until you hit the archipelago that leads to Wellgarth. Once you arrive at the town, however, you may be a little surprised at what you see; a man and a dog standing by a fire in front of a small building locked with a gold door. The man will be just as puzzled, thinking that there's supposed to be a town here. If you've collected the Gold Key, than you need not wonder any longer. Just unlock the door with the key and head down the stairs to find… an entire underground city. 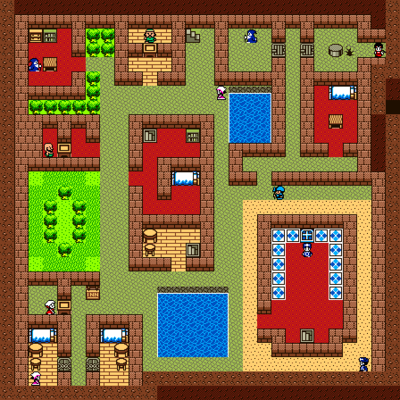 Once you enter the town proper, you can explore its many booths, most of which are shops. There is quite a large number of shops here in fact, and you should check them all thoroughly. The shop keeper in the booth along the left wall has an unusual entry among his wares. One line is completely blank. Select it, and he will ask you to tell no one that he has sold this item to you. After paying 2000 gold for it, if you look in your inventory, you will find that what you have purchased is in fact the Prison Key! Now you can unlock all of the jail doors! 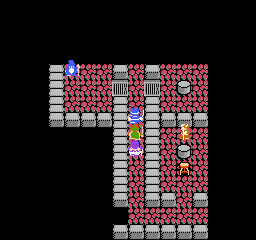 You will hear a lot of information about various magical items here. A man in the upper left corner mentions something about a man who lives in Tuhn that can make the Water Flying Cloth. A woman wandering around in the garden mentions how the Charm of Rubiss can be used to see through deception. And a prisoner in the prison (which you can now access thanks to the Prison Key) mentions that only those who possess the Eye of Malroth can enter the road that leads to Rhone. Clearly, seeking the five crests will not be enough to put an end to your quest. 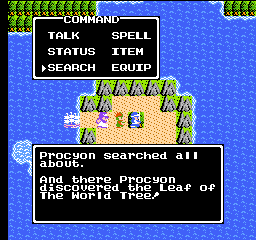 The location of the World Tree

It is worth pointing out two features that reside close to Wellgarth. One is the Island of the World Tree, and the other is the Fire Monolith. Both are worth checking out at least once during the game. When you approach the lone tree which sits on the Island of the World Tree, and SEARCH it, you will pluck a leaf from the tree which grants you the ability to instantly resurrect one dead companion one time. As a result of the special nature of this leaf, you are prevented from taking more than one leaf at a time, but it's always worth having one in your inventory, just in case. The Fire Monolith contains three Travelers Gates which spread to other corners of the world, along with a lone flame. There might be more to this monolith than first meets the eye. 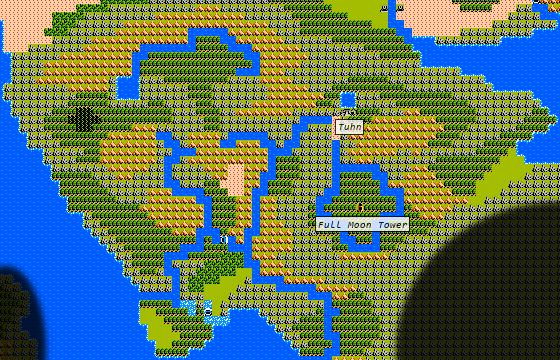 Tuhn lies close to the center of the northern region of the Rhone continent. As a result of the geographical layout, it is actually quite difficult to reach. Two rivers reach the interior of the continent, so sailing may appear to be your best bet. However, the river which runs closest to Tuhn will not deposit you at a section of land from which you can reach Tuhn. Instead, you'll have to sail around to the more eastern river, travel it as far as you can, and than walk the remainder of the distance. You'll have to traverse the hilly north, which will cause you have to plenty of difficult encounters, and travel all the way around to the east of Tuhn, before heading south and back to the west and eventually into the town itself. 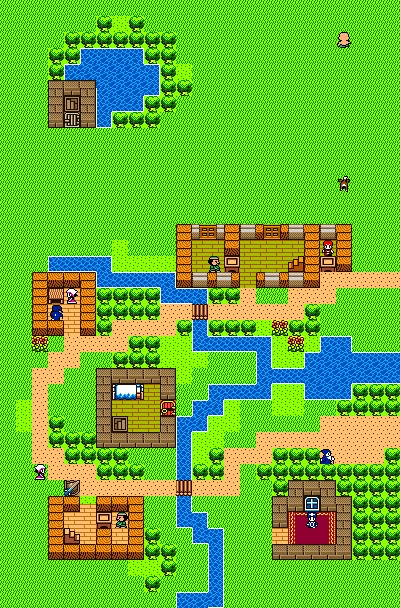 At first, Tuhn may appear to be a small town, but unlike many towns, it actually extends quite a bit to the north above most of the interesting architectural features. There are a number of things worth checking out like the Weapon Shop, and the locked door in the middle of the town. You will hear quite a lot about the Full Moon Tower, and that it lies to the south, but no one has been able to access it because the river which once led to it has dried up. Others speak about the fact that the key to the Watergate has been stolen, and by none other than a man whose name keeps popping up all over the world: Roge Fastfinger. How could one thief be so notorious? And where can you find him? 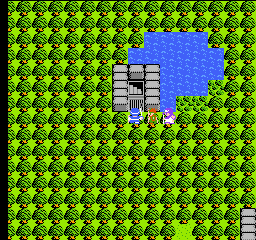 A bit of wandering around by the Inn may bring a dog to your attention. This dog wanders freely around town, and it's quite likely that you'll see him head up above the buildings in the north end of town. If you follow him, you will find that you can explore the region above these buildings. You will even find a man standing around to the right. If you look to the left, you will find a small nondescript building that is locked with a prison door. If you open it, you can walk downstairs to an odd sight; a pool of water enclosed by a white gate. This must be the Watergate, but you have no key which can open it, and without the ability to open it, you cannot access the Full Moon Tower. 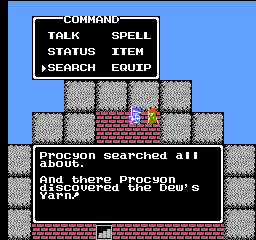 If you open the gold door to the building in the middle of town, you will meet Don Mahone, the famed tailor who others may have told you about, in connection with the Water Flying Cloth. He would be happy to assist you with making the cloth for you, but there's just one problem. Two problems as a matter of fact. He is missing his Magic Loom, and he has no Dew Yarn to make the cloth with. If you've explored the wizard's home in Zahan after retrieving the Prison Key, you will have found the Magic Loom beyond the magical barrier that composes the wizard's floor. As for the Dew Yarn, you should have received a clue on where to find that from the lady in the yarn shop behind the gold door in the town of Tantegal. She informs you that the yarn can be collected from the third floor of the north Dragon Horn tower. 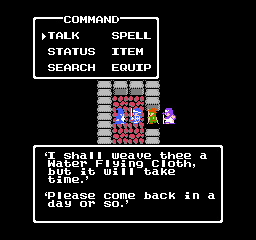 Returning the items to Don Mahone

If you climb up to the third floor and randomly search about, you will eventually discover some yarn. Bring both the yarn and the loom back to Don Mahone, and he will set about constructing the Water Flying Cloth for you. However, such craftsmanship takes time. As a result, you will have to save and quit the game, and load your progress back up in order for the give Don Mahone enough time to complete the job. Only after you save, quit, and return to your game, and have at least one free inventory slot, will Don feel that he has been given the necessary time. The result is well worth the effort. Although it can be equipped by anybody, the Water Flying Cloth is the most defensive armor available to the Princess of Moonbrooke; even more protective than the outrageously expensive Mink Coat in Wellgarth.

One task that remains at this point, in order for you to proceed with the rest of the game, is to reclaim the Watergate key. And in order to do that, you'll need to locate this Roge Fastfinger that you've been hearing so much about.

Where in the world is Roge Fastfinger? 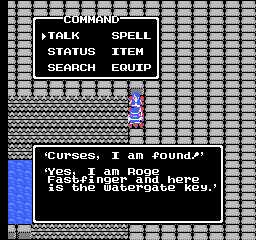 Roge Fastfinger's hiding place
In order to find this wily thief, you'll have to pay attention to the clues that people have to say about him. And no clue is as valuable as the one left by the jailor at Wellgarth. The jailor claims to have locked him up in this very prison, but he has somehow escaped! Could he really have gotten far? Of the prisons that you see, there is one to the left, occupied by an old man, and one to the right which appears empty. However, if you step inside the cell, you may want to check the walls of the cell by pressing against them. If you do, you will find that you can slip through an opening in the middle of the right wall, and you will find Roge Fastfinger himself, hiding out in the small crevice that he has made. In return for keeping his secret, he will return the Watergate key to you.

With the Watergate key in your possession, you can return to the Watergate in Tuhn, and use the key to open the gate. The water from the pond to the north will flood the dried out portion of the river which leads to the Full Moon Tower, allowing you to sail your ship straight to the tower itself.