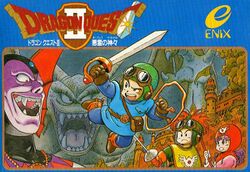 Dragon Quest II was released initially for both the MSX and Famicom. The game was re-released with Dragon Quest in the compilation titled Dragon Warrior I & II for the Super Famicom and later the Game Boy Color.

Dragon Quest II was announced as being in development for cellular phones in Japan, with updated graphics that are similar to those of the Dragon Quest remake.

Dragon Warrior II is set one hundred years after Dragon Warrior. A century of peace is suddenly ended when minions of the evil wizard Hargon attack Moonbrooke Castle. One lone guard, a wounded survivor of the battle, makes his way towards the kingdom of Midenhall. There with his dying breath he informs the king of their dire circumstances. The king then commands his son, the prince of Midenhall and a descendant of Erdrick (known as Loto in the Japanese versions and later re-localizations), to defeat Hargon.