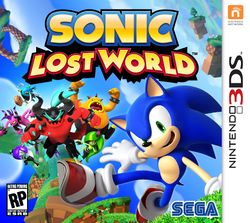 This guide is for the Nintendo 3DS version. For the Wii U version, see Sonic Lost World.

Sonic Lost World (ソニックロストワールド, Sonikku Rosuto Wārudo?, "Sonic Lost World") is an action-adventure 3D platformer that was developed by Sonic Team and published by Sega. It was released simultaneously on the Nintendo 3DS and Wii U consoles on October 18, 2013. Each game, aside from the story, is significantly different than the other.

The game's story focuses on the efforts of the Deadly Six, a tribe of Zeti who serves as the game's main antagonists, as they seek to siphon energy from the world. The protagonist of the series, Sonic the Hedgehog must team up with the classic antagonist Doctor Eggman, to stop the Deadly Six. Also, This is the first 3D sonic platformer on a Handheld Gaming Console.