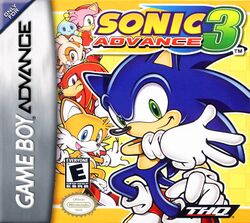 Sonic Advance 3 is a platform game in the Sonic the Hedgehog series, developed by Dimps and published by THQ for the Game Boy Advance. It was first released in North America on June 7, 2004, later in Japan on June 17, 2004 and finally in Europe on June 18, 2004. The game uses elements from Sonic Advance and Sonic Advance 2, as well as allowing the player to choose an additional partner, who augments the player's actions. The Chao Garden mode from the previous Advance games has been removed, and the Chao Garden in this game serves to help the player view the Chaos Emeralds and Chao they have collected.

Doctor Eggman tears the Earth apart using Chaos Control, and Sonic is separated from Knuckles, Amy, and Cream and is stranded with Tails. The two begin to search for their friends and the source of the trouble (which is the separation of the Chaos Emeralds). But like always, Eggman is making everything from doomsday devices to kooky contraptions and is trying to vanquish Sonic once and for all. The most dangerous of these is G-Mel, a super fighting robot made from the remains of Emerl.