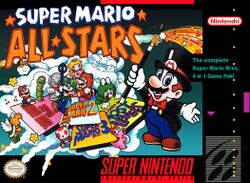 Super Mario All-Stars is a compilation of platform games for the SNES, released by Nintendo in 1993. It features graphically enhanced remakes of four Super Mario games, modified from their original NES versions to suit the more powerful SNES, and it had some glitches for each game fixed in it.

Represented in this compilation are:

It was re-released in 1994 as part of Super Mario All-Stars + Super Mario World, a compilation that featured All-Stars and Super Mario World, with the only significant changes to SMW being a set of unique sprites for Luigi, making him taller and slimmer than Mario, and the number of save files was changed from three to four.