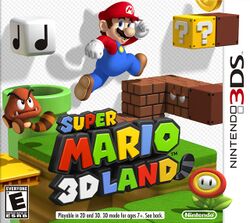 Super Mario 3D Land (スーパーマリオ3Dランド, Sūpā Mario Surī Dī Rando?) is a platformer in the Mario series developed by Nintendo EAD Tokyo for the Nintendo 3DS. The game was released in Japan on November 3, 2011, in North America on November 13, 2011, in Europe on November 18, 2011, and in Australia on November 24, 2011. It was announced at Nintendo's Keynote Conference during the 2011 Game Developers Conference held in San Francisco. The game is unique from other Mario games as it combines elements from both classic 2D side-scrolling Mario games and modern free-roaming 3D Mario games. The game was released to commercial and critical acclaim, and has sold over 5 million copies worldwide as of January 2012, making it the current best-selling game for the 3DS and the fastest-selling Mario handheld game in history.