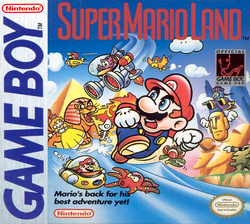 Super Mario Land is a 1989 side-scrolling platform game developed and published by Nintendo as a launch title for their Game Boy handheld game console. It is the first Mario platform game ever to be released for a handheld console. In gameplay similar to that of the 1985 Super Mario Bros., but resized for the smaller device's screen, the player advances Mario to the end of 12 levels by moving to the right and jumping across platforms to avoid enemies and pitfalls. Unlike the other Mario games, Super Mario Land is set in Sarasaland, a new environment depicted in line art, and Mario pursues Princess Daisy (who makes her debut in this game). The game also includes two Gradius-style shooter levels.

At Nintendo CEO Hiroshi Yamauchi's request, Game Boy creator Gunpei Yokoi's Nintendo R&D1 developed a Mario game to sell the new console. It was the first portable version of Mario and the first to be made without Mario creator and Yokoi protégé Shigeru Miyamoto. Accordingly, the development team shrunk Mario gameplay elements for the device and used some elements inconsistently from the series. Super Mario Land was expected to showcase the console until Nintendo of America bundled Tetris with new Game Boys. The game launched alongside the Game Boy first in Japan (April 1989) and later worldwide. Super Mario Land was later rereleased for the Nintendo 3DS via Virtual Console in 2011, which featured some tweaks to the game's presentation.

The game was lauded by critics, who were satisfied with the franchise's transition to the Game Boy, but noted its short length. The handheld console became an immediate success and Super Mario Land ultimately sold over 18 million copies, more than that of Super Mario Bros. 3. Both contemporaneous and retrospective reviewers particularly praised the game's soundtrack. The game begot a series of sequels, including Super Mario Land 2: 6 Golden Coins (1992) and Wario Land: Super Mario Land 3 (1994), the latter of which would later be spun-off into its own sub-series. Considered among the console's best launch titles, the game has been included in several top Game Boy game lists and debuted Princess Daisy as a recurring Mario series character.

Once upon a time, there was a peaceful world called Sarasaland. In this world there were 4 kingdoms named Birabuto, Muda, Easton, and Chai. One day, the skies of Sarasaland were suddenly covered by a huge black cloud. From a crack in this cloud, the unknown space monster Tatanga emerged to try to conquer Sarasaland. Tatanga hypnotized the people of all the kingdoms so that he could control them in any way he liked. In this way he took over Sarasaland.

Now, he wants to marry Princess Daisy of Sarasaland and make her his queen. Mario came to know these events, and has started on a journey to the Chai Kingdom where Princess Daisy is held captive, in order to restore peace to Sarasaland.

Can Mario defeat Tatanga, release the people from his interstellar hypnosis, and rescue Princess Daisy? It's all up to you and Mario's skill. Go for it Mario!!