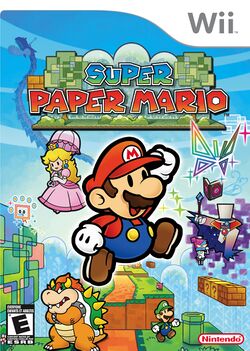 Super Paper Mario is a Paper Mario game that takes place after the Thousand-Year Door adventure. The game features a gameplay upgrade from previous Paper Mario games in that the player can switch between 2D and 3D perspectives. This feature is used to get around the game, since one perspective may not see certain secrets that the other reveals. Additionally, the game was developed in a more platform based manner; more like the games of the original Mario series.

Count Bleck raids Mushroom Kingdom's palace and kidnaps Princess Peach. Mario and Luigi, thinking it to be Bowser's work, once again set out to save Mario's beloved. As Mario and Luigi confront Bowser, Count Bleck sucks Bowser's forces and Luigi into another world. With the help of a pixel named Tippi, Mario teleports to Flipside, a place made up of people who are against Count Bleck. Count Bleck wields a book of prophicies called the Dark Prognosticus, which he used to create the void that sucked up Bowser. Bleck forces Bowser and Peach into wedlock and in doing so, the union of the two is said to summon the Chaos Heart, the consumer of worlds. With the Chaos Heart, he created The Void, a hole in the very fabric of space, which threatens to destroy the universe.