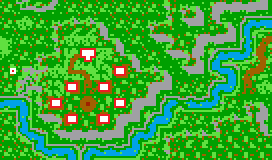 After visiting the Disquiqui tribe, continue along the main road to the west. Where the road ends, keep walking south-west along the river. Cross the ford, and you are at the foot of the Barrab mesa. Walk around it either way: the stairs up are on its west side.

At the base of the stairs you can meet an outcast, Nawl, and you can see a strange blue plate. Leave the plate alone for the time being.

The chieftain and shaman, Balakai, resides in the north hut. He will tell you the story of his magic battle against Topuru, and he will direct you to the Sakkhra tribe to get a blue stone. Of course, he will also set you on a quest to unite the Barrab with the other tribes. 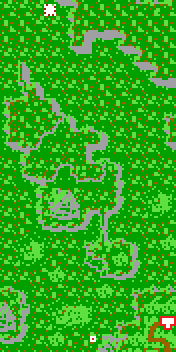 In-game map of Small and Great Mesa, north of the Barrab village 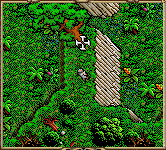 Keep at a safe distance when throwing a bomb.

Balakai asks you to bring him the root of a giant flower that can only be found atop the Great Mesa.

Leave the village and go north. Climb the stairs to the top of the smaller mesa. Use a bomb (or the fire axe) to take down a tree and create a bridge to the Great Mesa. The carnivorous orchid you're looking for is in the north-west part of the mesa. Fight and kill this boss, then pick up the orchid bulb.

With the medicine root in your inventory, go back to Balakai and ask him again to unite the tribes. Nakai gets healed, and you can talk to him now. Also, Balakai will tell you about his duel against Tuomaxx.

You're still on the quest to find Topuru's mind. Balakai told you to visit the Sakkhra, who live to the west.