Leave the Kurak village to the south-east and follow the road eastwards. Eventually, you will rach the Yolaru village, that is on the two sides of a river ford.

Rafkin can be met in a hut south-east of the central campfire.

When asked to unite the tribes, Apaton, the Yolaru chieftain, asks ten Nahuatla swords. The Nahuatla city is to the south of the Yolaru village. Your companion Rafkin, instead, asks to find the laboratory, that is near to the Kurak village. Although it'd seem more sensible to go back first and south later, it is actually more convenient to visit the Nahuatla city (and complete Apaton's trial in the meanwhile) before you go to the laboratory. 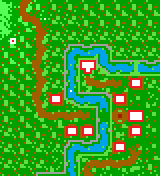 Apaton asked you to collect 10 obsidian swords. These weapons can be found in the Nahuatla city. You can obtain them in three ways: (1) collect the 14 obsidian swords found in the city; (2) buy some from the weaponmaker using emeralds as currency; (3) attack and defeat some Nahuatla guards.

From the east bank of the Yolaru village, follow the road south. At the first fork, if you go west you will reach Drum Hill: there is nothing to there right now. Back to the main road, continue south until you reach the Nahuatla city, Tichticatl.

In town, there are three people who can help you right now:

Collecting swords and other items[edit] 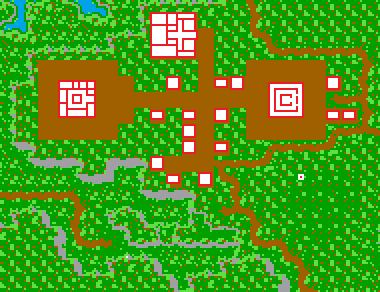 In-game map of the city.

Here is the list of all the items that can be found in Tichticatl.

The ten obsidian swords are a sufficient weight for the time being. Also, collect right now the clay, the soft clay pot and three fired clay pots: they are required to make grenades. Sulphur and bamboo will be useful, too.

When you come back later, collect all the leather and cloth armors, as well as any immediately useful item. A stock of spears for an atl-atl is still too heavy for your current party members.

The Nahuatla currency is the emerald

. You should have 18 emeralds already, found in the previous locations. Also, Paxaptamac the weaver will buy 10 parrot feathers for 1 emerald. You can use emeralds to buy equipment from Atlipacta the weaponmaker. Apart from the rare leather armors, the rest of the equipment can be easily obtained for free.

You can get enough obsidian swords without entering the dangerous north palace. When you're done, go back to the Yolaru village and give the swords to Apaton. 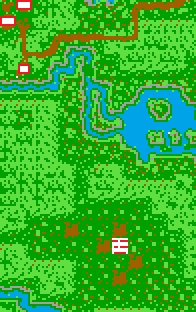 In-game map from Kurak village to the laboratory.

After you visited Tichticatl and collected some useful items, go back to the Kurak village. From the beginning of the road, just walk south-east along the riverside. Cross the ford and walk south near tar pits and across a thick forest. When the forest opens up, walk south-east.

If you completed Apaton's trial before looking for Rafkin's laboratory, you could already have found enough materials to make six grenades and a bamboo musket:

See the magic and crafting page for details about item crafting.

Now you should look for Jimmy and Aiela.

If you start from Jimmy, you will have to go south, then come back and go north, then back to the south again. Therefore, let's start from the trail leading to Aiela: go north once, then stay in the south and find both friends.