Prepare seven vines as "emergency exits" from the Myrmidex dungeon. This is actually optional, but it serves a purpose: it allows you characters to earn lots of experience and quickly raise thier level to the maximum (i.e. lv.8).

The seven entrances are: 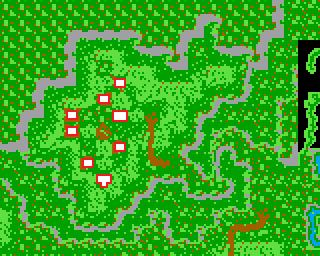 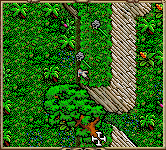 Make sure the tree won't fall on your head!

The seventh entrance to the Myrmidex caves is the more interesting: it is in the center of an abandoned village. No character in the Eodon says anything about it. In order to reach it, you have to fell a tree by throwing a grenade across a chasm.

You can meet Seggallion and get another rifle, plus lots of bullets. As an Easter egg, you can ask Seggallion about all the people that contributed to the making of Savage Empire. You can also ask him about the game he comes from and two games published by Origin the same year (1990).

Drum Hill is between the Yolaru Village and the Nahuatla city

Get a folded skin: there are plenty in the villages. Bring it to Tuomaxx on Drum Hill, and he'll make the Great Drum of Legend. Use the Drum, and the attack on the Myrmidex will start.

The only Myrmidex drone who can talk

After the attack cutscene, the Avatar and his party will be in the Myrmidex caves. It's actually the entrance from the Haakur spider cave.

Equip your seven characters with the three rifles, the Kotl black staves and the Kotl shields. Triolo's magic will be useful for orientation (Light and Eagle-Eye) as well as protection.

Look at the Kotl device: it points towards the location of the huge black stone. Try and talk to all the myrmidex: when you find Chizzztl, you are near the Myrmidex Queen. When you reach her, kill her. The huge black stone is behind her: Johann and the Xorinite wisp told you to destroy it.

When the huge black stone is destroyed, the endgame sequence will start.

There are two possible game endings, depending on whether the Avatar declared his love to either Aiela or Tristia (if he didn't choose either, the defaul ending is Aiela's).

Just know that if you want to report to Lord British, alias Richard Garriott de Cayeux, that you completed the video game, Origin System was disbanded in 2001, but today you can find him on Facebook.

After Savage Empire, but before Ultima VII: The Black Gate, the story continues with Ultima Worlds of Adventure 2: Martian Dreams.