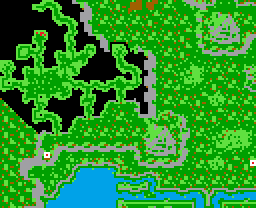 Leave the Barrab mesa and travel west. The stairs that lead to the Sakkhra are on the east side of the mountain slope.

Soon you will see some blue boulders. If you try and [U]se a metal hammer on them, it will bounce off. That's because your current characters aren't strong enough (unless Dokray is in the party: unlikely choice, because of his low dexterity).

In the village you can recruit Kysstaa. He's a well balanced fighter, with higher strength and dexterity than any other fighter character in the game. You can equip him with an atl-atl and a good stock of spears. Right now, he's the only party member strong enough to get a blue stone from a blue boulder: that's actually the main reason you're here for.

Recruit Kysstaa, give him Rafkin's metal hammer, then go in solo mode and [U]se the metal hammer on a blue boulder. You will get a blue stone.

The lizardmen don't have many items that can be useful for the humans.

Parrots are not members of the Sakkhra tribe, nor they are met nearby, but they hold important information concerning #Sysskarr's trial.

Note that male Sakkhras have a crest on their head, while females do not. 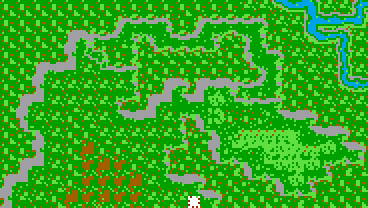 In-game map of the medicine grove, north of the Great Mesa. 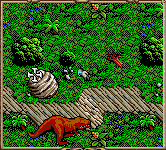 Use a bomb to push the boulder.

Sysskarr asks to defeat the Thunderer, a tyrannosaurus that invaded the medicine grove of the Sakkhra.

Before meeting the Sakkhra, it would have been useful to talk to some regular parrots. They're not a tribe, but ask them "Unite?", and they'll say their plan to unite against a tyrannosaurus.

The medicine grove is north of the three mesas. The shortest route would be on the west side of the Great Mesa, but unfortunately a Myrmidex nest is on that side, and it's almost impossible to get through.

Therefore, travel back to the base of the Barrab mesa, then all the way north. You will probably see the hub of the #Kotl teleporter plates: just continue north. Follow the cliff to your left until you see some green fruit trees: that's the entrance of the medicine grove. Instead of going in, turn around and walk to the north-west. Climb some vines and explore a side-valley. At the south-east end you'll find a boulder, right above the Thunderer. At this point, remember what the parrots said about the tyrannosaurus. Use a bomb to push the boulder on the tyrannosaurus.

You can now explore the medicine grove, where you can pick 12 green fruits. Despite what the Sakkhras said, the green fruits work like regular meals, and they're equally effective on humans and Sakkhras.

Go back to Sysskarr (remember to keep on the east side or the Great Mesa), and ask him again to unite. This trial is complete.

It is now time to travel all the way back to the Barako village, that is pretty much at the opposite end of Eodon valley.

Luckily, there is a faster way. You probably spotted already the strange blue plates near the mesas: they are Kotl teleporting device. They correspond to the Moongates in the previous Ultima titles, although they are not connected to the moon phase.

Step on any Kotl teleporter, and you will be teleported to the hub, where seven moongates link to seven different locations. Of course, there is none that connects to the Urali village: it would be too easy!

Exit the Sakkhra caves and walk all the way west, then south, and enter the Kotl teleporter there. In the teleporting hub step on the plate that teleports near the Barako village.

When you talk to Topuru, he takes the blue stone and thanks you in two ways: first, he tells you where to look for the Urali village; second, he gives you 8 portions of turtle bait whenever you ask him about turtles. Make sure you get at least 16.

You finally learned where the Urali tribe is hidden: let's go and save Aiela.