This is the first game in the Deus Ex series. For other games in the series see the Deus Ex category. 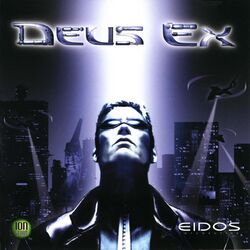 Deus Ex is a cyberpunk-themed action role-playing game developed by Ion Storm and published by Eidos Interactive in the year 2000, which combines gameplay elements of first-person shooters with those of role playing games. The game received almost worldwide critical and industry acclaim, including being named "Best PC Game of All Time" in a 2007 poll carried out by British gaming magazine PC Zone. It was a frequent candidate for and winner of "Game of the Year" awards, drawing praise for its pioneering designs in player choice and multiple narrative paths. It has sold more than 1 million copies, as of April 23, 2009.

The title is ancient Latin for "God from...", a clearly incomplete sentence. The Latin words are pronounced "DAE-ous EX", but the game authors and many fans generally pronounce it "DAY-uss EX".

First published for personal computers running Windows, Deus Ex was later ported to Macintosh systems, as well the PlayStation 2 game console, the latter under the title Deus Ex: The Conspiracy. Loki Games worked on a Linux version of the game, but the company went out of business before releasing it. A sequel to Deus Ex, titled Deus Ex: Invisible War, was released on December 2, 2003 for both Windows and the Xbox video game console. On November 26, 2007, it was confirmed that Eidos Montreal is developing a prequel, Deus Ex: Human Revolution.

Set in a dystopian world during the 2050s, the central plot follows J. C. Denton, a rookie United Nations Anti-Terrorist Coalition agent, as he sets out to combat terrorist forces, which have become increasingly prevalent in a world slipping ever further into chaos. As the plot unfolds, Denton becomes entangled in a deep and ancient conspiracy, encountering fictional recreations of organizations such as Majestic 12, the Illuminati, and the Hong Kong Triads throughout his journey.