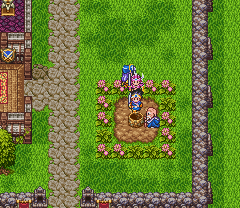 The SNES version's location of the well that is the entrance to Medal King Mansion.

Medals are a bonus feature added in the SNES and GBC versions of the game that provide players with a way to get unique equipment. Medals in the GBC version are called Tiny Medals whereas in the SNES version they are called Small Medals. These medals are not to be confused with the GBC exclusive Monster Medals.

The Medal King Mansion is found in a cave underneath Aliahan. If you inspect the well in the southeast corner you can climb down a rope to find it.

The cost of the rewards are cumulative. For example, if you give 5

/ Small (SNES) medals to Medal King and receive the Spiny Whip, then you only need 5 more to get the Garter Belt. The names here are listed twice to denote the GBC/SNES version differences.

You only need 100 Tiny/Small Medals to get all of the rewards, but there are over 110 Medals in the Game. So it doesn't matter if you miss a few.