Personalities are a game mechanic added to the remakes of Dragon Quest III which effect character attribute growth. The Hero is assigned one of 30 personalities through a test at the beginning of the game and recruited members are assigned a personality based on their starting attributes. Personalities can be changed throughout the game with the use of book items and by equipping certain pieces of equipment. There are a total of 45 possible personalities. Note that in most Dragon Quest games, attributes are determined randomly at level up, or according to a specific distribution of growth.

The sexy personality (or "Vamp" in the iOS version) is often regarded as the best due to its +70% composite attribute bonus. Many choose to use female characters over males, since this personality is exclusive to Females.

However, not all attributes are equal. Due to the way the game's attributes are calculated, Vitality and Intelligence give the biggest bonuses for every extra point you earn. For reference...

Vitality and Intelligence, therefore, give far more value per point than the other attributes. And while the "Sexy/Vamp" has decent Intelligence, its Vitality pales in comparison to personalities such as the "Tough", "Solitary", and "Timid" personalities. In addition, its bonuses, while generally high across the board, are not as high in any attribute as the game's more "specialized" personalities.

For these reasons, you will want to be careful before assigning it to any particular classes. HP is arguably the game's most valuable attribute; and some classes are specialized enough to where they don't actually benefit from all of the bonuses of the "Sexy" personality. The Warrior, for example, will always be going last in every battle; it makes very little difference whether they have 60% Agility growth or 140% Agility growth. 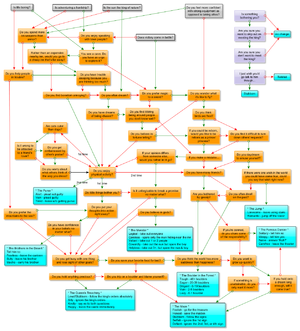 At the start of a new game, the hero is asked a series of questions by an unknown source. These questions determine the hero's starting personality. The player is asked to enter their real name and birth date, however these inputs have no effect on the resulting personality test. The first question is randomly chosen from the 5 possible starting questions. Any of the 30 possible personalities can be obtained from any of the 5 starting questions. In total, there are 43 different questions that can be asked, including 1 question which can be asked twice.

The 32 possible starting personalities for a hero are:

The 13 personalities which the hero cannot start with are:

Characters which are created and recruited at Luisa's Place have different mechanism to determine their personality. Each character class has its own set of base attributes.

As each character is created, the player is given the opportunity to use five seeds to further raise the character's attributes. Each seed will increase the single attribute by 1-3 points. The seeds can be distributed manually or randomly by the computer if the player chooses that option. After the final starting attributes have been determined, a calculation is performed to determine the personality.

The base values from the above table are subtracted from the final starting attributes to get the "bonus" values, i.e. the amount by which each attribute exceeds the base value for the character's gender and class. The five attributes are ranked from highest to lowest bonus. If two attributes have an equal bonus, the base attribute value is used to break the tie. Finally, a personality is chosen based on the class, the highest bonus, the value of that bonus, the second-highest bonus in some cases, and random chance.

How to get the personality that you want[edit]

When recruiting party members the best thing to do is to save between making party members. Choose the class you will be recruiting, then choose a fully positive personality for the class that you are recruiting, for example, the Honest personality for Priests/Clerics (which is primarily Str, Vit, and Int focused). Some personalities are better for building a particular attribute and are meant for advanced progression strategies (e.g. focusing on a personality that gives the highest bonus for a particular attribute).

After you've chosen the personality that you want, look in the above tables to see which primary attribute needs to be given seeds in order to get it. Although the requirements for getting the personality you want may result in skewed starting attributes, that is a minor inconvenience. Now, if you have a Priest/Cleric that you want to have, for example, the personality type of Honest, you have to make sure the following conditions are met (this is also outlined in the tables, above):

The easiest way to make sure the second condition is met is by not spending any points in it. A better way is to make sure STR has 3-6 points (1-3 seeds) in it, then add 2-5 points (1-2 seeds) to another attribute that doesn't affect personality (in this case AGI and LUK). The final seed can then, probably, be safely be added to INT or VIT (in some cases the final seed will apply 2 points and mess the whole thing up).

The result is a slightly skewed set of attributes, but after a couple of levels they will be on track again.

Personality can be altered during the game in two ways: a character can equip a piece of equipment which forces a specific personality, or a book item can be used which changes the character's base personality. Book items can be found throughout the game, with many hidden in bookcases and pots in towns. The most highly valued book is the sexy book which is obtainable through one of the wishes Divinegon grants.

The following table shows the different translations of the personality names in the SNES and GBC versions of Dragon Quest III. Note that this table uses the DQ translations English patch.

In the World you will find various books. By reading it the Personality of the Reader will change.

For Info on Accessory see: Items