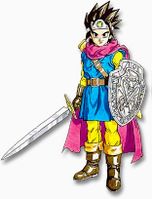 The Hero is the main character, and there can only be one. In the original version, the Hero could be male or female, but the text would often refer to them as a "he" regardless. While the Hero may start off slow, he will quickly become one of the most powerful and indisputably the most versatile. The Hero can equip most of the weapons and armor that soldiers can and a few that they cannot, including the most powerful equipment in the game. The Hero learns a mix of Pilgrim and Wizard spells, often much later than those classes, and there are a few spells that only the Hero can learn. Generally the Hero will be an attacker, only using magic in emergencies or when the others run out of MP.

Apart from the Hero, there are eight possible classes (only seven in the original NES release), which you will choose when you create your three allies. There are two important restrictions:

Note that gender affects marginally any class's starting attributes, but it doesn't affect growth or available spells. There are a few Weapons and Armors that only women can use, but none that are significant.

See the experience charts for how many experience points it will take to raise each class and the spell lists for what magic each class can learn (if any). 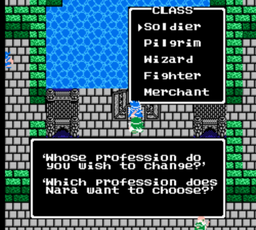 When a character reaches level 20, you can change his/her class at the Shrine of Dhama. This process allows you to turn, for example, a Pilgrim into a Soldier, or a Fighter into a Wizard. It is also where you go to create Sages. When you change classes:

There are, however, a few restrictions: 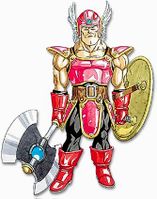 Soldiers, known as warriors in the remakes, have two abilities: dealing massive amounts of damage to enemies and absorbing massive amounts of damage from enemies. Soldiers can equip almost all of the best equipment which, when combined with their high strength and vitality, makes them walking tanks. They have two disadvantages: first, they are incredibly slow (the slowest class) and second they cannot learn any magic. These two disadvantages can be mitigated or even completely negated by turning a Fighter or magic user into a soldier late in the game.

In the remakes, a fitting Personality for a Warrior should improve Strength, but not Intelligence.

Fighters have a lot in common with Soldiers: they are incredibly strong, have high HP and vitality, but cannot use magic. The major difference is that Fighters are incredibly fast, but cannot equip much in the way of armor. Fighters will take more damage than Soldiers, but since they almost always attack first the enemy may not live long enough to deal damage. Fighters allow you to play more offensively while Soldier are more defensive.

In the remakes, a fitting Personality for a Fighter should improve Agility, but not Luck.

Pilgrims, known as clerics in the remakes, are characters that focus on magic. In particular, their spells are useful for healing and protecting the party. They learn a couple of offensive spells but, the vast majority of the time, they will either be attacking or using healing spells. Pilgrims are surprisingly good physical fighters. They have fairly high HP and strength (usually dealing about 50 - 75% of what an equivalently leveled Soldier would do). They can equip a lot of high level armor and weapons, though they do fall behind a bit late in the game.

In the remakes, a fitting Personality for a Cleric should improve Intelligence, but not Strength.

Wizards, known as mages in the remakes, learn incredibly powerful offensive spells and have enough MP to cast them more than enough times. They are not supposed to attack in physical combat; actually, they have access to numerous weapons that can be used to cast spells for free, instead of attacking physically. Unfortunately they are the weak link when it comes to defense. Since they have low HP and vitality, and cannot equip much armor, they will likely be the first to fall in battle. As such they are a prime candidate to turn into some other class which removes all of the disadvantages but keeps the Wizard's redeeming qualities.

In the remakes, a fitting Personality for a Mage should improve Intelligence, but not Strength.

Merchants, known as dealers in the remakes, are useful through all the game. They have the special ability to find extra gold and items from enemies (in addition to what is normally dropped), which can come in handy in a few situations late in the game. If you are going to search for rare item drops, then it is a good idea to turn a high level Goof-Off into a Merchant. Merchants are a very useful support class, but not great fighters: they aren't able to use many equipment and their strength falls behind that of the Hero and battle-oriented classes (Warriors & Fighters).

In the remakes, Merchants are given a special set of spells that are exclusive to their class, including Excavate and YellHelp. The Merchant class is the key to a subplot later in the game, however you can just register one right before you need them.

In the remakes, a fitting Personality for a Dealer should improve Vitality, but not Agility. 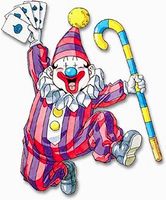 Goof-Offs, known as jesters in the remakes, have the highest luck of all classes, which can come in handy if you're trying to get certain pieces of equipment from enemies. Another benefit of a Goof-Off is that they can turn into a Sage without the need of the Book of Satori. On the other hand, they are nearly useless during battle. In addition to having low strength and defense, and not being able to equip much, they will often fail to do anything in battle (including parrying).

In the remakes, they are given one spell Whistle, which attracts enemies to the spot and initiates a battle. This is very useful for quick grinding or to look for a specific item drop.

In the remakes, a fitting Personality for a Jester should improve Luck, but not Intelligence.

Sages are a particularly powerful class: they have the high MP and intelligence of the Wizard, the strength and defense of a Pilgrim, plus they can cast almost every spell in the game. There are a few high level weapons and armor that the Sage can equip that the Pilgrim cannot, but for the most part they are Pilgrims that know offensive magic. The only disadvantage of a Sage is that they require much more experience to level up than any other class; often 1.5 times as much. While you can often use the extra power of the Sage to push through dungeons earlier than you could without one, it will often catch up to you suddenly (usually when you reach a boss).

The actual attributes of a Sage are hard to state since it carries over much of its attributes from the original class. If you turn a Wizard into a Sage he/she will have more MP but less Strength than if you turned a Soldier into a Sage. That said, for the most part, no matter who you turn into a Sage, you're better off.

In the remakes, a fitting Personality for a Sage should improve Intelligence.

The Thief class is a new class that was introduced in the Super Famicom remake of Dragon Quest III. Thieves have high agility, and have the ability to steal during battle. Their few spells are all very helpful, from Smell, which tells you how many treasures are left in the area, to TipToe, which lowers your random encounter rate. They are also the only character class that can use some of the powerful whips in the game, which attack not only a single monster, but an entire enemy group.

In the remakes, a fitting Personality for a Thief should improve Agility, but not Vitality.

The difference between character classes can be summarized in a triangle diagram.

A villager early in the game suggests the Hero to start off with a party consisting of a Soldier/Warrior, a Pilgrim/Cleric and a Wizard/Mage: these are the three corners of the diagram below. The Hero is a well balanced character, therefore he's in the center.

The Fighter (top) has lots in common with the Soldier/Warrior, the difference being in the higher agility and lower armor. The Sage (bottom) is by all means a sum of a Pilgrim/Cleric and a Wizard/Mage. The Goof-off/Jester (bottom) seems useless but can spontaneously be turned into a Sage. The Merchant/Dealer (left) has some abilities that can support the party. The Thief (center) has a few spells that can be considered neither White nor Black magic. 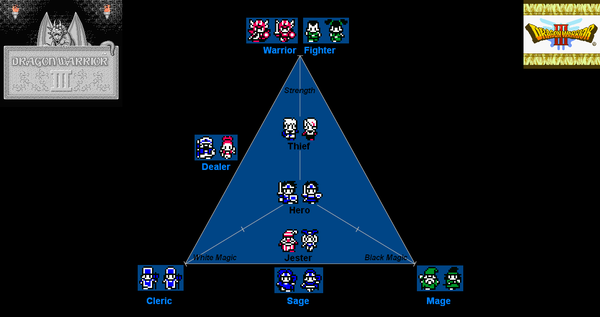