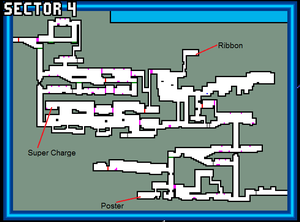 The converstion with Krotera didn't go well. As such, your current option is to reach the communication array, and inform the Komato about the Tasen base and occupation.

First off, go down the lift.

The first room contains a few soldiers and a commander. In the middle of the room, you can upgrade stats as necessary. You can kick down the door to the right (or rocket jump) to the eastern section, while provides access to a ventilation shaft (which you can jump down if desired.)

If you take the lifts, you need to either crack the security door to the left, or unlock it from the terminal. Get the rocker launcher if allowed, and head left (past the soldier and turret) and jump down the shaft.

If you go by the ventilation, mount a shredder and smash open the door.

From either shaft, you will enter a room that is patrolled by soldiers on shredders. These vehicles can harm you just by touching, and the solders mounting them can also shoot as well. To defend against them, mount the nearby shredder to avoid the ramming, and shoot the soldiers off the shredders. Be sure not to destroy them when they are too close; they explode when shot.

Zip over to the right until you see a pair of security doors. From there, upgrade your skills and proceed upward.

You can bypass the doors by kicking a shield door down, but if you aren't strong enough, you'll have to proceed upward. Be sure to activate the checkpoint.

The right storage area has an easily accessible terminal. While there are more scouts and soldiers, they aren't much of a threat. Activate the terminal on the far right, and head back.

The left storage area has a single turret and a Tasen Elite. The terminal is in the top-left corner of the storage, to reach it, get past the Tasen, jump onto the mid-air crates, and reach the top-left terminal. Activate and return.

Once you are past the double doors, you can only head down. You should be on a different floor where you need to turn on the power core to proceed. The power core is to the left and down the lift, behind a few soldiers, and a commander.

When you turn on the core, an enemy Tasen shredder will appear and attack.

Return to the security door and jump down. You need to head left again, and activate the terminal to open the final security door. You can also upgrade some skills if you want.

Before the two bulkheads, go up. To the left is a large room, which has a small exit on the top-right. Climb it to get the ribbon.

On the exit floor, you should see a terminal to the left that unlocks the final door. To the left is a cracked wall, which needs to be destroyed by a rocket.

Near the exit, you may see a passage that is too high for you to normally jump. Use the shredder to assist and climb up. If you don't have a rocket launcher, kick one of the Tasen solders down, and convince him to use a rocket for you. Then, climb onto a shredder, drive it down the shaft.

Drive it to the left a full speed, and jump at the last minute. You'll enter the restricted area.

From the starting point, head down the lift and go straight right. Eventually, you should see a glass wall or shield door. Kick the door down, or perform an assisted rocket jump through the glass. Continue right, and jump through the glass window (which should be shattered by the turret.)

Alternatively, approach from the other side by blasting a hole in the wall with a rocket launcher.

At the bottom of the ventilation shaft is a Tasen shredder. Mount it and drive as far as you can to the left. When you reach the end of the line, make a final jump and catch the ledge before said supercharge.

At the start of the map, you can break down a wall with the rocket. You can find a logbook containing a spoiler about the plot (later on) followed by a description of the "Rocket jumping" game from the Komato army. You can reach this up until you pass through the security door on Floor 9 - after that, there's no way back.