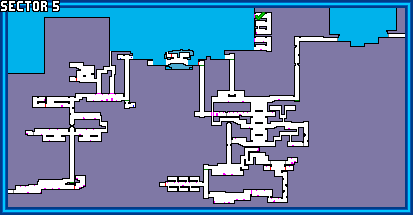 The Komato have landed, and are attacking in full force. Because of the attack, Dan lost his connection with you...

The first room has Tasen and Komato fighting from the start. You can use the combat to your advantage to reach the other side of the room. Head up.

The next room has more fighting as well. The path up is blocked, and requires a detour to the right. After the detour, head further up, and to the right.

The corridor seems to have Tasen soldiers waiting, but a Berserker teleports in from the ceiling. Head right, and up the lift.

On the survace, head through the Komato Assault post, and east into one of the entrances to the eastern base. You need strength 8 for the lower entrance, otherwise, take the upper entrance.

You need to get a jump upgrade in a restricted area. To reach it, you need to unlock two terminals (or bypass the security door using spread rockets). The first terminal is near the lower entrance. You can reach it by activating a terminal below the group (Floor 8), or by finding a way to break the glass window (usually from combat).

The second terminal is from floor six on the right exit. Head into the ventilation, and jump down to reach the terminal, and find your way back.

Head back to the central chamber, and go down the shaft (or the hole you created from the spread.) Go left to the lift and go down. First go into the side room, and crack the tasen terminal there, then head down and right.

On the right hand side, you should see a climbalbe shaft. Go up, and collect as much as you can from the storage area before getting the jump upgrade. Then, enter the ventilation and jump to the top. Blast the explosive if you haven't already and go to the top of the central chamber.

The exit is in the top-right of the map.

Asha is a high-ranking assassin, who is very dangerous - but not very skilled as demonstrated by losing an arm by teleporting into a wall. After a small assumption about General Tor being the next target, Asha attacks.

Asha rapidly teleports and will quickly dodge or reflect most attacks - thus the definition of "plasma-fast reflexes". Because of pride or some other reason, Asha takes damage from the shotgun or buster gun. (Asha also takes damage from melee attacks; the pause before the sword stroke from behind is an excellent opportunity to turn and deliver a kick, if you happen to be close enough for one.)

When you inflict enough damage, Asha will teleport away.

Located to the right of the central shaft, on the right-half of the map.

Create a nuke from a rocket launcher and MPFB Devistator. Next, climb to the top of the right-hand building, blasting the necessary walls with your nuke.

The poster will be at the top of that area.

Asha is well known for plasma-fast reflexes. However, a nuke is still faster than plasma.

Also, defeating him with a Nuke gets you one of the most priceless reactions ever:

There's two ways to the lower section on the right. Normally, you can use two terminals to unlock the bulkhead door, but you can also blast the floor with spread rockets.