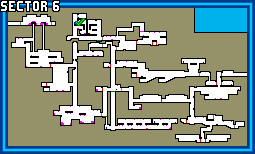 Iji is currently hunted by Komato and their assassins. In order to survive, she is heading to a nearby control room to find Dan.

Go forward, blow the explosive crate and jump down. In the next room, kick open the shield door and go right, into another room.

This is your first encounter with a "normal" assassin. You can either defeat him or leave the area to have him stop chasing you. To get out of the room, you need to use a terminal on the left, and exit to the right.

Now, you are confronted by a security door. The terminal can be reach from either Floor 9 or Floor 2.

Floor 2 has heavy combat between Tasen and Komato in a corridor. The end of the corridor has a teleporter that leads nearby the terminal

Floor 9 has Tasen solders and commanders, as well as a MPFB turret. Shredders also partol the area. While Komato are in the region, the Tasen are more numerous near the entrance.

Optionally, you can head to Floor 12 and climb up the shaft to get the CFIS, however, you need Komato 10 for it to be useful.

Once you open the door, head past it and down the shaft. The first terminal will give you a set of sector maps you can use. Head east and kick down another door to see an assassin - he will flee when you head to the right shaft.

Go down the shaft, and head left to unlco

Located in a secure area on Floor 3, near the right of the map. It can be reached by activating a terminal on Floor 7.

Caution
Reckless use of some weapons may prevent you from getting the poster.

In the right-half of the sector at the top, you should find a terminal that unlocks a door. Behind this door are two rooms, one of which has weapons and supplies, the other having boxes blocking the climb.

Create the Velocithor V2-10. Climb up and blast a few boxes behind a wall that will prevent you from making your jump.

The supercharge is behind a glass window in the bottom-right section of the map. Hit the glass with a splintergun to break it.

Alternatively, use a nuke.

The terminal next to the supercharge as a game playing on the terminal: a rectangular strawberry exploring a large fortress.

A terminal in the second assassin room (where you get the sector maps) contains a copy of Hero3D.

Yukabacera is a secret bonus boss who appears near the poster. Defeating him unlocks the scrambler. He has 50hp, a CFIS and Plasma Cannon, 100% dodge rate, and moves twice as fast as normal. The easiest way to defeat him is to use the MPFB while he's near the wall to hit him with the splash damage.