If you haven't bought a third ship weapon and you still have Kursha space between you and Aibit, now is the time to buy an extra ship weapon. You are almost certainly going to have to fight something before getting to Aibit. You can get a 15mm Machine Gun at Anoa for 600 Dy or you can buy something else. 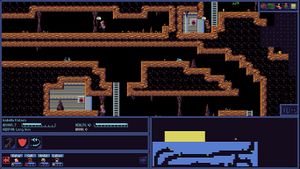 When you orbit Aibit, you will be greeted by the UHC Grand General. Talk to him, allocate at least three energy to stations, and then land at the Hub. Land your ground team and climb down the ladder to the right. Your Long Guns should be able to hit the Bat from next to the ladder. Climb down the next ladder and press the switch. Climb back up and try to kill the capybara-sized Ratters and barely-above-ground Tremors from a distance. When you reach the end of the passage, reload your weapons. The Ratters in the passage below the one you just cleared can be killed from the platform between the four ladders. The Bat on the left can be killed by climbing the ladder and guarding when it moves. The lowest horizontal passage can be cleared with the shoot-and-jump tactics and the shoot-from-a-distance tactics. The Bat on the far right can be killed from the platform to its left. Reload your weapons. Press the second switch after killing the Ratter and Tremor. Fight your way through the next horizontal tunnel if you plan to collect resources. Climb up the vertical shaft and kill the Bat from the platform near it. Then enter the main hub and kill the Tremor that most likely has fallen in. Talk to the Kaidun on the right. Hire another recruit, buy some Kaidun Explosives for him, and collect the resources before you leave. If you talked to the Bounty Hunter on Xiwang, you can talk to her again to get something. 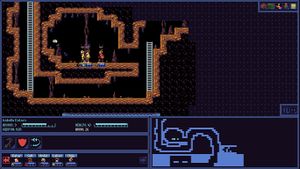 The lone Kaidun. The boss chamber is below.

After fighting the enemies and descending the tunnel, you will meet a lone Kaidun. Talk to her if you want a recruit, but always choose to say nothing until you can make your offer. If you say anything else, she will turn hostile. You will need to fight a few more enemies before getting to the rogue queen. The queen will not normally leave the grey chamber area, so you can just guard from a distance and wait for the shots that get past the door to kill her. If you get close enough for her to attack, she may teleport out of the chamber. In this case, you will need to enter the chamber and shoot from there.

If the Hub respawned, fight your way back to the Kaidun you talked to before to complete this mission. Collect any resources that are available.