Professor Layton and the Last Specter/Puzzles 001-025

Caution! This page contains all the hints and solutions for every puzzle from 1 to 25. Scroll carefully or you might spoil the answer of a puzzle for yourself. The solutions are hidden behind spoiler tags, so only take a peek if you're desperate.

Description: "Hershel, my dear old friend, I must earnestly seek your help again. Our little town is in the most extraordinary predicament. At night, a mysterious giant shrouded in fog had been laying waste to our homes. I am convinced you can help stop this madness. Please come soon! Regards, Clark."

Answer
HELPSOS. The answer is taken from the first letter of every row.

Description: These four photos were taken at the same location. Three of these were shot by tourists who took turns taking of each other. One of the photos was taken on a completely different day. Tap the three photos that were taken by the tourists who traveled together.

Answer
Photo C. All of the other pictures were taken at noon, as can be seen from the shadows.

1. The box below it is the same color.
2. There are boxes above, below, to the left and to the right of it.
Which box meets both of these criteria? If you apply both conditions, you'll find the correct box!

Answer
It is the box in the third column from the left and the third row from the top.

Description: "I loaded my cart in such a hurry that everything fell out when I hit the first bump in the road! Can you put everything back without leaving any spaces so the load is secure? Please? Pretty please?" 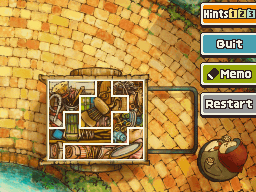 Arrange the cart according to the picture.

Description: You need to get one dog, two cats, and three baby chicks across a river. You can take two animals at a time. If you leave the dog with only one cat, there will be a fight. The chicks on the riverbank must outnumber the cats. Otherwise, a fight will break out. Can you ferry all of the animals across without them fighting? 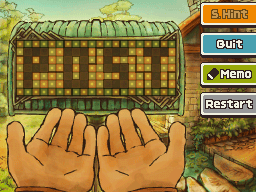 Arrange the tiles according to the picture.

Description: These poor-quality mops take two days to dry after they've been used, and the handle completely breaks after just three uses! What is the minimum number of mops that you would need to clean every day for a 30-day month?

Description: It's all too easy to get lost in this big, dusty hall. There are 14 mirrors set out in some sort of strange arrangement here. You're trying to find a way out, but your only clues are a small arrow on the floor and a laser pointer bearing the words "Exit indicated by larger arrow." Which door is the exit?

Answer
B. The laser reflecting off the mirrors creates an arrow pointing to B.

Description: The butler left a note with instructions, but it's hard to read because he seems to have written it in a hurry. "Don't forget curtain 13!" Yet there are only four curtains labeled: A, B, C, and D. Which of these was he referring to?

Answer
Curtain B. The "B" in the note was misinterpreted as "13".

Description: This rat hid his key behind his supply of cheese. He is paranoid about it being found, so he wants to change its hiding place. The only problem is that his cheese is in the way! Can you help the rat move his key from the hiding place on the right to the matching space directly to the key's left?

Description: While this photograph shows two cyclists passing each other on a hill, the camera was tilted when it was taken, making the incline look completely flat. Can you tell which side of the photo is actually uphill? Please tap either A or B to enter your answer.

Description: You need to check all 12 rooms in the hotel. You want to be as efficient as possible and make your rounds without entering the same room twice. There is a number you can use to help you remember the route so that you can check every room with no backtracking. What is that number?

Answer
25. The number is formed by the only path that visits every room once.

Description: You have two empty buckets and are currently in a park with two fountains. Starting at the position marked by a star, visit both of the fountains, filling a bucket at each, and return as quickly as possible to the starting point. Assuming you do not travel along the same path twice, what route should you take? Draw a line along your route.

Answer
From the star, go straight north and round the border, then pass both fountains on the path back to the finish.

Description: There are four tables in this cafeteria. The total cost of the food ordered at each table is the exact same amount. What's the last item ordered at table 4: A, a cup of tea; B, a glass of juice; or C, a plate of toast?

Answer
A, the cup of tea.

Description: You're supposed to meet a friend at a restaurant, but you forgot which restaurant! You know the restaurant is due north of the hero statue, due south of the goddess statue, and due east of the lion statue. You have a map, but it doesn't show compass directions or statue names. Which restaurant are you looking for?

Description: Two luxury cruise ships pass each other in the middle of a very calm sea. The two ships are completely identical, and the two ships' captains happen to be good friends. "Ahoy there, Captain Brown! I didn't think I'd see you here!" "I didn't expect to see you either! But it looks like you've been steaming along at a fair rate of knots, Captain White!" Which ship is Captain Brown's?

Description: It may not look like it at first, but one of the dolls, marked A, B, or C, is identical to the doll on the far left. Which of the three dolls could be an exact match for the fourth doll?

Answer
Doll C. It is the original doll flipped over.

Description: This quiet road is lit by 10 streetlights. Deep in the dead of night, the lights are blown by a power surge and all the lights are replaced. Unfortunately, the bulbs are poor quality--one breaks every two hours. Finding it hard to keep up, the unlucky repairman only manages to bring a replacement bulb every three hours. How many bulbs will still be lit after 12 hours?

Answer
0. It will be daytime after 12 hours.

Description: There are four types of fussy fish in the tank below. The orange fish dislike the yellow fish, and the yellow fish dislike the blue ones. The blue fish abhor the purple, and the purple fish can't stand the orange. What's worse, no fish can be with another fish of the same color. Add dividers by drawing straight lines from the notches along the side of the tank without crossing over any fish. Using just four dividers, can you divide the fish and bring harmony to the tank? 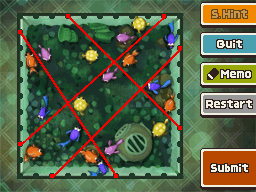 Draw your dividers according to the picture.

Description: A famous artist was commissioned to paint this picture by a wealthy, yet eccentric, cat lover. The painting, entitled "How Cats See the World," actually contains several hidden cat shapes that are designed to blend in with the background. Can you find all the cats hidden in this painting? How many are there?

Answer
There are 8 cats total.

Description: The fog has made this sign impossible to read. While the townsfolk can't recall the exact order in which the numbers appear, they do remember the following:

Use the clues to put the numbers in the correct order.

Description: Hotels often provide stationery in their rooms for visitors to use. In your room, it seems some mischievous individual has cut a hole in one of the sheets of notepaper. You want to cut the paper into two identically shaped pieces. The boxes marked by dotted lines are perfect squares, and you cannot lose any part of the stationery. Where should you cut? 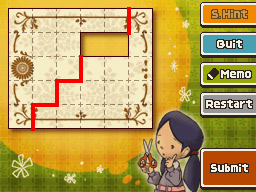 Cut the paper according to the picture.

Description: While taking a clock down from the wall, you drop it on the floor, cracking its face in half. Curiously enough, you find that the sum of the numbers on each side is equal. Draw the line that shows exactly where the clock face is split in half.

Answer
The line starts from the point directly to the top of 9 to the point below 3.

Description: A prince and princess from two countries have fallen deeply in love. But their two countries are at war, and so the young lovers cannot be together. Tonight, as they gaze at the moon, separated by more than just distance, each sheds a single tear. Bring them joy by forming a symbol with which to adorn the night sky. You may move and rotate their tears as inspiration.

Description: There are four different types of buns in this assortment of 12. There are more cream buns than butter buns, fewer chocolate buns than jam buns, and fewer jam buns than cream buns. If buns of the same type always have the same shape, what is the fewest number of buns you'd have to taste to determine which shapes are each type?