As a stage, Darms is host to more Doms than any stage that you've encountered so far. In fact, they will be the only enemy that you encounter throughout the entire stage. You'll meet a full variety of them, from the basic green, to the stacking gray, to the flying blue and the fast moving reds. 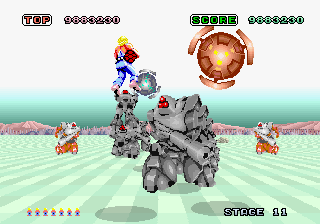 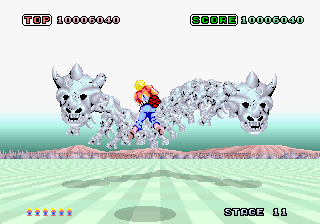 The boss of this stage is a two headed skeletal dragon known as Salpedon. Despite appearing as an undead version of Godarni, he's really not any different to fight than the stage 3 boss. Keep moving around to avoid all of the fireballs that both heads produce as they approach you, and use their retreat as an opportunity to score some safe hits before they get too far and start advancing again.