There's only one type of enemy that you will encounter on NATURA: Doms. Every kind of Dom robot makes an appearance on this stage, and nothing else. That means keep moving in large circles around the screen in order to avoid getting struck by missiles. Holding still will nearly guarantee that you get hit. 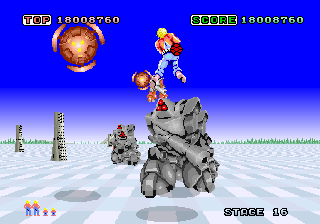 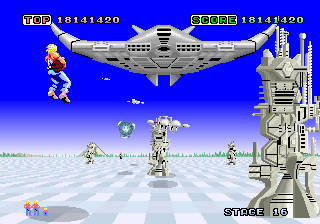 The boss of NATURA is actually an indestructible mothership known as Stanley. It flies in from the distance, and hovers in the sky. It is completely indestructible. Don't even bother focusing any firepower on it, as it is useless. The only thing you can really do to stay alive, is to focus on the Valkyries and Doms that appear from the ship and attack you. Since they all shoot missiles, you're going to want to continue moving in large circular motions in order to avoid getting shot. It won't take that long before the enemies stop appearing, and the ship flies away, permitting you to advance to the next stage.