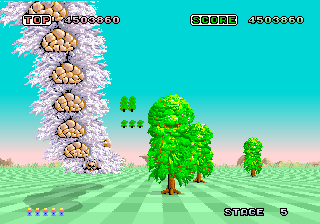 The fifth stage is the first of two bonus stages. In these stages, a friendly dragon named Uriah will approach you and pick you up for a ride. You will then proceed to fly over terrain with a variety of vegetation. Your one and only goal is to fly Uriah into as much of the vegetation as possible in an effort to smash them. You have no control over Uriah's vertical motion, but you have a good amount of control over his lateral movement. Steer him into anything that you see appearing off in the distance. For every plant you destroy, you will be awarded 50,000 bonus points when the stage ends. Then you will advance to the next stage.