You've been through this before. Just like in CEICIEL and REVI, the background will be obscured by an upper layer of terrain that flies over you like a ceiling. In addition to the columns, you must avoid the Binzubins which now alternate between the floor and the ceiling very rapidly. The scene will darken during the middle of the course, and the Binzubins will flash bright yellow as they race by. 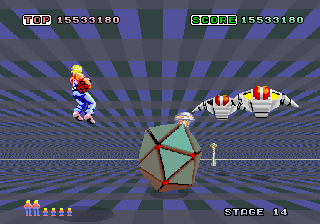 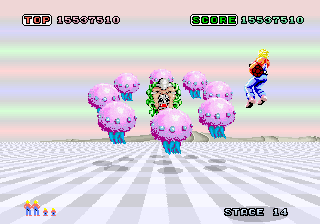 The boss of this stage is extremely similar to the boss of IDA, Shura. Like Shura, Barbarian is a face surrounded a ring of mushrooms which orbit around him. Also like Shura, Barbarian moves around in a wide circle, getting close to you, but then disappearing very far into the background before making a return trip. However, unlike Shura, it does not appear possible to defeat Barbarian until all eight of the mushroom that surround him have been destroyed. In the meantime, Barbarian sends lot of fireballs you way to keep you moving. Anticipate his return trip by waiting for him on the right side of the screen if you're not in danger of being struck by fireballs.