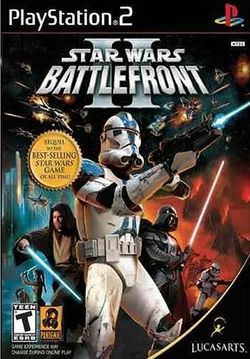 Star Wars: Battlefront II is a first-person shooter/third-person shooter video game developed by Pandemic Studios, and published by LucasArts. The game is the sequel to the immensely popular Star Wars: Battlefront. It fixed many of the problems of its predecessor, such as poor maps and introduced many new features such as the ability to play as Jedi, space combat, vehicles, as well as adding new maps and missions.

Unlike its predecessor, Battlefront II features a more narrative-based campaign, retelling sections of the Star Wars storyline from the point of view of a veteran 501st Imperial Stormtrooper from his tour of duty in both the Old Republic and as part of the Galactic Empire.

Battlefront II's gameplay is fundamentally similar to its predecessor's. The general objective in most missions is to deplete the number of enemy forces to zero. Killing an enemy unit subtracts from that faction's reinforcements and the same goes for the players or allies. Besides simply killing enemies, players fight for control of Command posts where units respawn after death and which allows players to change character classes. Most command posts can be captured by killing all enemies nearby and standing by the command post for a set amount of time. Controlling a majority of the command posts scattered on a map results in the faster depletion of the enemy's forces and allows the player to respawn in more locations. If all command posts are captured the losing team has only twenty seconds to recapture one before the game ends in their defeat, regardless of the amount of reinforcements they have. There are two eras from which to choose; Galactic Civil War, or Clone Wars. Each era features two opposing factions; in the Galactic Civil War the Rebel Alliance verses the Galactic Empire, while the Clone Wars features the Confederacy of Independent Systems (CIS) verses the Galactic Republic. While most character classes are similar to classes of the other factions, each faction has two unique classes, which are unlocked after a certain amount of player points is reached.