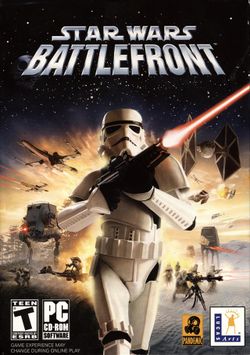 Star Wars: Battlefront was released on September 21, 2004; it was an immediate hit and won many awards and best-game nominations. It was nominated "Best Online Multiplayer Game" in the E3 Game Critics Award; it was named "Best Online Game" in 2004 by Game Revolution and Game Domain; and was named runner-up by IGN.com for the "Game of the Show" award.

This is the first Star Wars game to allow you complete freedom on the battlefield. You can fight whoever you want, however you want, whenever you want. The flexibility of the gameplay is what earned this game such high reviews from critics. Selected critical reviews:

… the opportunity to blast enemies into oblivion with the Star Wars' universe's best-known vehicles and weapons is a dream come true.

This is what Star Wars games are supposed to be like. It's fast, it's fun, and yes, it's epic.