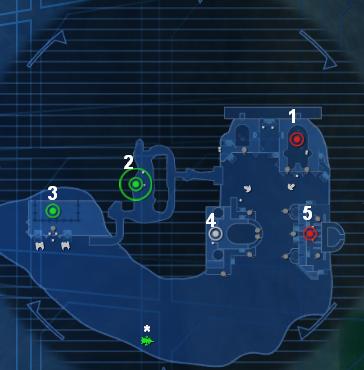 * The asterisk on the map denotes an AT-TE, a mobile spawnpoint with impressive firepower.

There are four ways to start this level. If you choose to fight as a grunt soldier, spawn inside the tunnels (2) and defend the CP from the first wave of droids that attack. If you choose to fight as a jet trooper, spawn at the western command post (3) and stay near the AT-TE as it moves into the battlefield. If you choose to shoot things with a vehicle, spawn as the pilot at the west CP (3) and jump in a tank. Use both guns (laser cannon and rockets) to take out AATs and (4) Spawn from the AT-TE as a Jet Trooper and fly to the lighthouse. If you are fast enough, you will be able to take the lighthouse before the bad guys come up there and blast you to bits. This gives your side the advantage, unless you are too slow, in which case they shoot you as you are capturing it.

Whichever method you choose, you will get killed at least once. After you've had your fun here, switch to method 1 and spawn as a normal soldier in the tunnels (rocket launcher units will also work, keep reading). The exit to these tunnels takes you into the big battlefield. If you look to your left as you exit, you will see stairs: these stairs are where almost all the enemy units will come at you from. Unless you are feeling particularly brave (or stupid if you're not an expert), stay in the tunnel! Just defend the ice caves from invaders; don't worry, there will be no shortage of enemy units, particularly droidekas (this is why a rocket launcher is useful here). Once the enemy reinforcement count is under fifteen, it's probably safe to step out into the open and hunt the last few opposing units.*