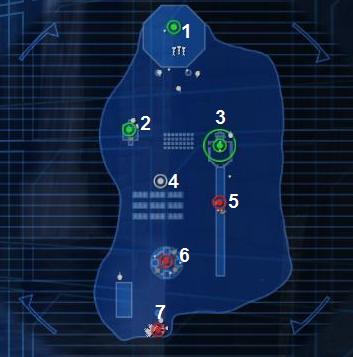 Spawn as a normal soldier at the Reflecting Pool (3). Start walking south, but DON'T shoot at any opposing units yet. Wait for the initial wave of 8-10 units to clear the command post (5), then run down the hill and capture it.

Now, to make the most use of your time, see if you can capture CP 4. If you die, respawn back at CP 3 as a sniper and walk out onto the aqueduct. Go all the way to the second-to-last opening between the arches — you should be able to see the ground between the fountain (6) and the steps (4). Snipe enemies here until either they shoot you or you run out of ammo (neither will happen for a couple minutes). By this time, your units should be sufficiently spread out so that you will have back-up for whatever you decide to do. Start making a systematic sweep of the command posts with a grunt soldier or a sniper, no-zooming (see "Tips and Tricks"). Take each CP slowly and methodically, and this level won't be a problem.