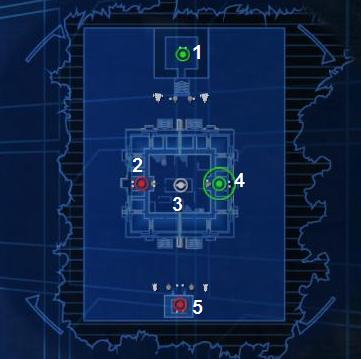 This is a dangerous level. No matter what you do, chances are you'll get killed at least twice. Of course, walking into the middle of the arena is suicide, as is walking around the arena. What's left? Sniping! Spawn at CP 4 as a sniper (remember that Empire sniper rifles only have one zoom level) and stand at the railing overlooking the arena. Be careful not to stand next to the turret or you might accidentally catch a face full of rocket. Fire across the arena at enemy units spawning at the other command post (2). Or, if you're up for a challenge, fire into the arena at enemy units. Don't worry if your reinforcements fall faster than your opponent's at first, you'll catch up.

Another way is to spawn as a dark trooper and fly down to CP 3 from your CP in the arena. Peg grenades into the opening of their command post from the bottom. The Dark trooper's "shotgun" is very effective at close quarters.

Once the game has progressed a little (about halfway), you can leave your sniping position and either get into an AT-ST (1) or try to control the entire arena on foot with a grunt soldier. If you lose all of the arena CPs, you better get one back. Without one, all your efforts are wasted. Pick the method that best suits you, and don't get discouraged if you don't win this level the first time — it's harder than some of the ones after it.

Spawning at CP 4, head left along the ledge to about 3/4 of the way, stopping at a large square stone impeding your progress unless you jump on it. Rebels are spawning from CP 3, so stay here a moment and thin their ranks, be careful to take out snipers first. Staying in one place is a good way to get shot, so dance around a little bit. Usually two rebels will enter from the corridor nearest you, so take them out. You don't have to totally kill everyone before charging in. Sometimes a turret has been erected, sometimes not.

As you run towards CP 3, blast anyone in your way, obviously. Some will run down into the arena to their left, some won't. When you get into the room with the CP, sometimes a few rebels are crouched by the droids, so be careful of them. Use the droids as shields if they spawn next to you while draining the CP, but mostly they'll spawn with their backs to you behind the turret (if there is one). There's no real trick to this other than using the standard caution while taking a CP.

From here there are only two options: Take the arena floor, using your elevated position as a great vantage point, or go to your right, up the steps, and just start killing the enemy from there. If you're good at avoiding being shot, you'll likely run out of ammo in the latter option.

If your troops have taken or come close to taking CP 2 on the arena floor, go hunting outside the arena. Sometimes your side needs a little help taking the floor, so thin the enemy out a little from above, near where the turret is/would be, and go down. The real problem with arena fighting is it can quickly get confusing to look at. The only way to really get your bearings is through experiencing the twists and turns. At first it will seem like a death trap, but after you've been there several times you'll get to know your way around effectively.

Once you're in the arena, a corridor leads back up to ground level where the last command post, 5, is located and heavily defended. You can easily enough clear the corridor out, but you will die after a while defending your progress on the stairs going up. All you can do is roll to avoid grenades and blast away while just clearing the top step. Keep moving back and forth as much as possible.

When you die, do as you will. You can take a nap at this point as the rebels' days are numbered on this board. By this time in the battle, your input doesn't even matter. This is also a board where you will rarely capture the last CP. Grabbing a chicken walker seems to take forever to get back into the action, and you're often pummeled by turrets, rebel ground vehicles and rocket launchers. The ideal situation is to capture the landspeeder thing – then you can really go to town and rack up a good kill record. You can typically wind up with 70–80 kills on average and only die once playing as the standard grunt.

Snipers are fun, but if you start off with one, you're already putting yourself at a disadvantage. As with every other Empire/rebel board, the grunt works best and the rest are just for show and having fun after the hard work is done. The only specialty character worth anything is the super trooper, and he's only good at fighting when the enemy is right in front of him. He's also the hardest to kill (besides the droideka, of course).

This Strategy is best suited for those snipers who are decent with a blaster pistol.

Spawn at CP 4 as a Sniper, and when facing CP 3 make your way right towards the door. As soon as you exit, turn right again, facing the stairs. There is a little slanted edge that runs along side, so just run up that and make your way on top of the bunker. Once on the bunker, it is pretty self explanatory. Thin the rebel ranks on the opposing side. Feel free to destroy there Health and Ammo droids, however they could come in handy later. One important note, the rebels will take CP 3, and there is nothing you can do about it. While you are taking out the enemy, keep in mind three things:

After you find your bunker clear of enemies, and the reinforcement levels are in the double digits, start making your way down from the bunker, reload once more, and then proceed out the right door around the arena on the second level. When you are half way across, make your way up the hill of the arena, and hide in the brush. Using this position, clear out as many rebels as you can. This is where the blaster pistol will pay off. Since you are more likely not in the presence of a pilot you will eventually run out of ammo. Using your blaster pistol force your way into the now mostly empty enemy bunker, chances are that you will die, however the relief fire you provide will allow infantry to begin their attack. If you die, do not fret, simply re-spawn at CP 4 as a Stormtrooper, and make your way around again, now you will be more of a force to reckon with. If your comrades haven't already captured CP 2, you should be able to by yourself. After this, Rebel reinforcements will be so low, you have practically won the battle already. Just proceed out of the arena and hunt down any remaining rebels, which at this point should be in the single digits.