The first underwater level in the game. 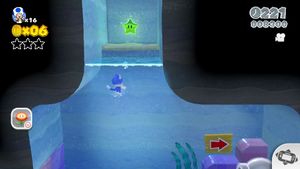 When the water rises, swim up to this hidden area for the first green star.

The level begins in a small pool area. Invisible coin-purse enemies are hidden in bushes in the lower-left and upper-right for an easy 20 coins. When you're ready, head through the pipe.

Head right and dive underwater to find a Roulette Block for a random power-up. Head farther right and continue along, dodging Cheep-Cheeps and Porcupuffers. Before taking the exit pipe, swim up to find the first green star. Then take the pipe past a pair of sunken ships and to the checkpoint. 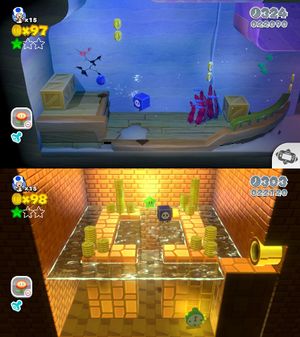 By using the cannon box from the stamp area, you can blast this wall away. Behind it is a treasure room containing the 2nd green star. 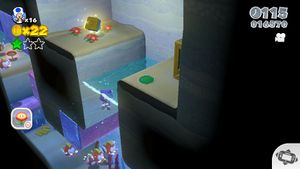 This secret area contains the level's stamp. Grab the ? box to the right for a cannon, while you're up there! 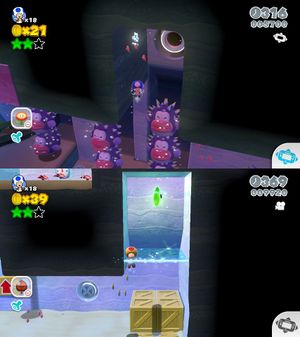 A third hidden recess holds a pipe. Through it, the third green star is up the right path and the level exit up the left.

Dive underwater and hit the first ? block for a fire-flower. Swim right and up from there to find a hidden area containing the level stamp and a cannon-block (and an invisible block with a mushroom). Grab the cannon block and head straight down to find a cracked wall. Shoot it and enter the pipe for a treasure room with the second green star.

After exiting the treasure room, head right to find a bunch of Porcupuffers, and swim directly up from the third column of them to find a hidden pipe. Taking this pipe will lead to an area with the last green star and 2 more coin-purses (in the clumps of grass). Furthermore, this route will put you on the upper ledge of the goal area, allowing you to reach the top of the flagpole.