This stage introduces Plessie, a dinosaur that appears in a few stages throughout the game. 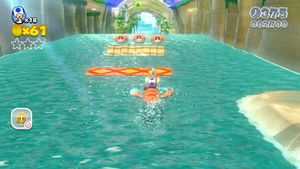 Launch off the ramp to collect the first green star. 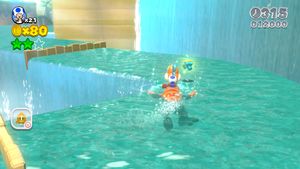 If you're having trouble navigating this turn for the stamp, remember you can hold 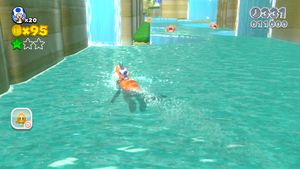 This waterfall leads to the second green star, as well as an invincibility star and a bottomless pit. 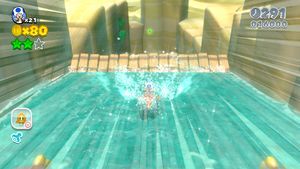 Hit the last booster and jump as far as you can for the third green star!

Hop onto Plessie to begin the stage. After passing the first row of enemies, you'll see a ramp. Jump when you hit that ramp to get the first green star. The next section is a ravine with a few bridges crossing it. If you climb the right side up to those bridges, you'll find the game's first red ring: Go through it and collect the 8 red coins that appear for a 1-up.

After that, climbing the set of waterfalls on the left will net another 1-up. Down the slope is a choice: Going through the waterfall on the left leads to the second star, while going right will get you the stamp. Unfortunately, you'll need two trips through the level to acquire both. If you opt for the star, there are a couple of tricky jumps afterwards, so be careful.

After the paths join, there's a large downhill run with a bunch of enemies. At the end of it, you'll go off a big jump, so try to aim for the final green star. The pipe takes you to the end of the level, but before you reach the flag, you can get 12 invisible coins hiding under the stairs.