This page contains the Green Star locations, Secrets and Stamp Location for Super Mario 3D World's World 3-1 Snowball Park. This level contains some cool Suits and Power-Ups you haven't had access to before, including the Super Leaf (Tanooki Suit), Helicopter Block and Kuribo's Skate. 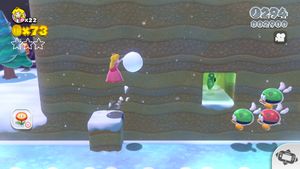 Use snowballs to clear a path to the first green star.

You can pick up a Helicopter Box at the very start of the level. Cross the first section of ice and look behind the tree for this special item - If you want the third green star, try to keep it until the end of the level. The Snow Pokies can be defeated by jumps or taps. You can also knock some of the Goombas out of their ice skates in the level to take over Kuribo's Skate.

The first Green Star is behind a wall of 9 enemies flying in formation. Kill them and you can get to the Star in a cubby behind them in the cliff wall. The Super Leaf can be found in a block immediately past the first star, and the midpoint is just to the right of that. 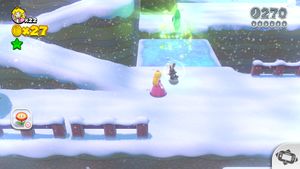 Chase down the rabbit, or stun it with a tap to get the second Green Star. 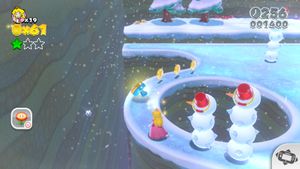 Be careful navigating this narrow path for the stamp. 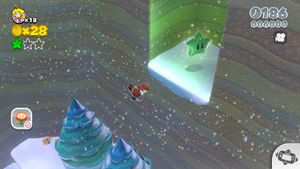 A simple jump isn't enough! Use the propeller box or a raccoon-flutter wall-kick to reach the last star of the stage.

Go down the slope to arrive at an ice-rink of sorts. Use the red ring to practice skating and you'll get a Super Leaf. Ahead, a rabbit holds the second Green Star, but it's pretty tricky to catch. Try to trap it against the rear wall as it hops up or down to the upper level. You may also throw a snowball at the rabbit or even tap it on the GamePad touch screen to stun it, making it much easier to catch.

Past the rabbit, the level's Stamp is in an obvious area just before the green warp pipe leading out of the level. Getting to it is tricky, since it's on a thin strip of ice - Go slow! If you are having to difficult a time with the ice, try using the Cat Suit for better traction.

Before taking the pipe to the end of the level, climb the right tree to see a nook with the third Green Star in it. If you kept the propeller box or a cat suit, reaching the star is easy. If you only have a racoon suit, you can wall-jump and flutter to the star. Otherwise, you should retry the level to get it.