The world 3 ghost house is full of moving floors and illusory objects. 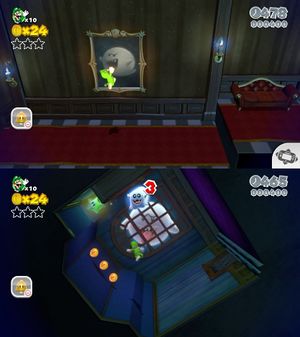 This Boo portrait hides a rotating room. Dodge the ghosts and grab the first green star when it comes into reach. 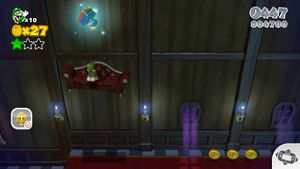 This couch will levitate and bring you to the level's stamp. 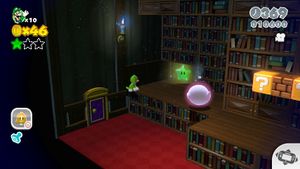 Head right from the start to see a moving ? block - go on top of it to find another with a fire flower. At the junction after that, go up the stairs: the only thing downstairs is a hidden mushroom and 8 coins. On the upper floor, there is a painting of a Boo that can be entered to find a room with ghosts and the first green star. Jump on the couch to the right of the painting to be taken to the stamp. Continue along the moving floor to reach the next room.

In the library, bookshelves will move when you stand on them. Ride the moving bricks to the top, and go all the way left to reveal the second green star. Then, continue to the checkpoint. 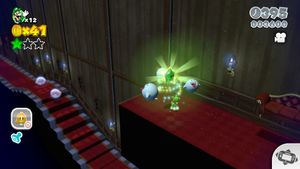 The third green star is disguised as a pipe. Trying to use it reveals its true form.

The ? block behind the checkpoint holds a fire flower. The stairs ahead will move like a escalator as long as you're standing on them. Go up them, and head towards the screen between the gap in the railings to get a 1-up. Sneak past a big boo and up another escalator to find a fake green pipe and a split in the path. Going left only nets you a hidden mushroom, so go right to the next door. Before taking it, you can find 16 invisible coins on invisible clouds by jumping to the right.

Through the door is a short outdoor section. Don't bother with the 1-up as it's a fake. Dodge the ghosts and head back inside. Here, several ghosts will appear as you make your way right along several conveyers. Take the couch to the right of the exit door up to a fake green pipe that turns into the 3rd green star.

After taking the door outside, several big boos will appear to chase you. Go against the conveyers to reach the flag, and then keep going because that flag is fake. The true end of the level is just a little ways to the right.