For 15 stars, you can unlock this nighttime stage. There are a lot of touch-blocks here, so keep your stylus at hand (or just use your fingernail). 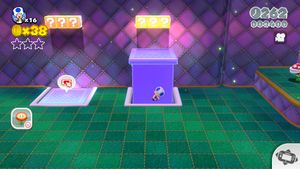 Down this hole is a room with the level's stamp. 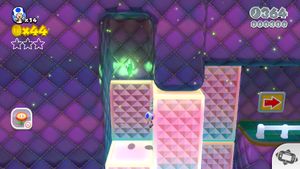 Be fast when getting the first star: touch blocks will retract after a few seconds!

Pink platforms move when touched, so go up the first two to an area with goombas. To the left, near the dandelions, is an invisible coin-purse enemy, called a Coin Coffer. Blow to make it shimmer, and hop on it for coins.

The next two purple blocks are hollow inside. The first contains microgoombas, which can be squished with the touchscreen or blown away with the mic. Above the second block is a fire flower, and if you go underneath it, you'll find a room with this level's stamp.

Up ahead is a bit of a puzzle for the first green star: touch the platforms to make stairs, and when you're as high as you can go, bring out the top-middle block and wall-jump to reach it. From there, head right for the level's checkpoint. 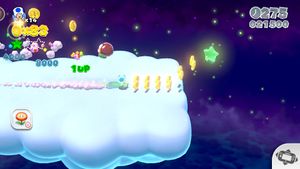 In the clouds, use the invincibility star to get a 1-up and the second green star. 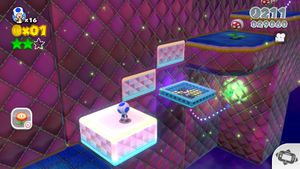 The third star requires the use of both stylus and microphone.

Right behind the checkpoint is a propeller-platform: By blowing on the mic, the platform will move. Take it to a warp box.

The next area is a propeller-platform gauntlet. On the first platform, blow the microgoombas off or tap them to defeat them. Blowing also reveals a few invisible coin blocks. Ahead, you can see a cloud-cannon leading to the second green star.

After getting down from the clouds, blow to reveal a hidden box with a 1-up inside. Make your way past the piranha plants to a 2d-esque section where the third green star resides. Get it, and make your way up to the flag.