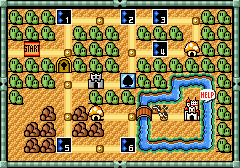 A meat-headed Koopa boss named BOOM-BOOM defends Grass Land's stony fortress. He has also hidden a second whistle in this fortress. BOOM-BOOM is a big Koopa bully, and he guards the danger-filled fortress in the middle of this world.

Secrets of the Warp Whistles
The Whistles let you travel to any world you want to visit. Once you have found a Whistle, use it when you're on the Map Screen, and you'll be transported to a World 9, the Warp Zone.

Delve into a dark cavern and face all kinds of unfriendly cave-dwellers. This odd underground cavern (originally an ice cave in the NES version) offers another chance to go to Coin Heaven. It also gives you a chance to practice your Slide Attack.

Expect a wild ride on this stage's dangerously erratic platforms and lifts. Rail Lifts with motors are safe to stay on, but those without will fall off the screen upon reaching the end of the line.

Board an airship that's bristling with cannons and dodge your way to Larry Koopa. Bowser's seven bratty kids, also known as the Koopalings, have each taken a magic wand from a King of a Mushroom World. Larry, the youngest Koopaling, turned the King of Grasslands into a Cobrat (originally a dog in the NES version). It's Mario to the rescue!

If at first you don't succeed…
If you don't beat Larry the first time, you can try again. However, the airship will flee to another spot on the Map Screen. It will try to take a position beyond unfinished sections of the world. But the Anchor item will prevent the airship from getting away. 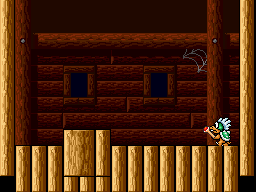 The youngest of Bowser's Koopalings, Larry Koopa is in charge of defending Grass Land from meddlesome plumbers like you. To save Grass Land's king, you'll have to teach the Koopa brat some manners.

Distinguished by his royal turban, the King of Grass Land is relieved to be normal again. And it looks like the king's Mushroom Retainer has a note for Mario from the Princess, along with a free power-up item, a P-Wing.