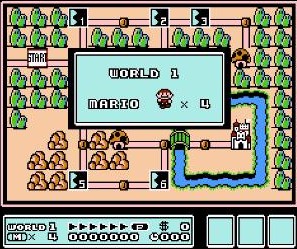 once to end the demonstration and bring up a menu. Choose one or two players and press

again to begin the game. The map of the first world is revealed. A small window will appear in the middle of the screen, indicating the player and the starting lives. Navigate to level 1 and hit

You take control of the Mario Brothers throughout the adventure. Player 1 controls Mario, while Player 2 is in charge of Luigi. In the original NES version, Luigi is simply a green palette of the Mario sprite, but starting in Super Mario All-Stars, Luigi was given his own taller slimmer sprite to distinguish him from his stouter brother. Aside from the way they look, they are identical in every way in this game, including their ability to jump.

The brothers begin each new life in their regular small form. As regular Mario and regular Luigi, they are quite vulnerable to attack from an enemy. One hit, and they are finished. This can be corrected by finding and catching a Super Mushroom, which transforms them into Super Mario or Super Luigi. While super, they can jump up and break bricks, and they can survive contact with an enemy, but they will be transformed back into regular Mario and Luigi as a consequence.

In addition to the Super Mushroom, there are several other power-ups available. The two most common are the Fire Flower, which gives the brothers the ability to toss fireballs at their enemies, and the Super Leaf, which transforms them into Raccoon Mario or Raccoon Luigi. In this form, they gain a tail that can be used to attack enemies, and if they run fast enough, they can use their tail to take off into the air for a limited period of time. In most versions of the game, getting hit by an enemy in either one of these forms transforms you back into Super Mario and Super Luigi (although in the Japanese version of the original game, you would regress all the way back to regular Mario and regular Luigi.)

You may also find Invincibility Stars which let you crash into enemies without fear for a few seconds, or 1-Up Mushrooms which grant extra lives if you catch them. There are also three kinds of suits to collect, including the Frog Suit, the Tanooki Suit, and the Hammer Brother Suit. See the Items page to learn more about each of these suits, and the benefits they provide.

Mario and Luigi will continue their adventure until they run out of lives. If you ever happen to run out of lives, you will be permitted to continue from the beginning of the world that you died in, but your score will be reset to zero. A score is kept throughout the game, but it has no true significance on the outcome of the game. Only your ability to survive each of the eight wild worlds of the Mushroom Kingdom will determine whether you can reach the evil King Bowser and rescue Princess Peach from his clutches.

At the bottom of the screen, you'll see a light blue bar. This is the Information Bar, which provides the important statistics throughout the game. 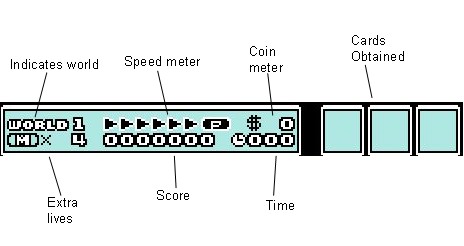