Moving from the dry desert to the bottom of the sea, Mario is in for quite a change in scenery. You'll have to imitate an amphibian to survive your aquatic adventure. It can't get any wetter than this!

You'll earn a second Hammer item from a Hammer Bros. and you may wish to use it on the rock to the right of World 3-5. Doing so will give you access to a canoe that you can row around the world. Two docks let you visit remote islands that contain Toad Houses, which offer free items for your inventory, as well as two chances at bonus lives.

Exploring the bottom of the sea can be dangerous. Take a deep breath—you'll need it. Ocean Side is one tough world. The critters in the sea are mean, lean and hungry! Since water is the primary element in this world, the Frog Suit or Firepower is the recommended choice of gear.

Increase your chances of collecting 5-Up!
You get 5-Up for three Star Cars. To collect a Star Card at the end of every world, run towards the goal while holding down

Leap quickly from platform to platform. Just don't fall in the drink. Those pesky flying fish, the Cheep-Cheeps, are back and more bothersome than ever! It's best to use firepower to fry them, but you can also stomp them. 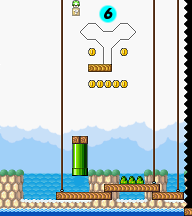 Boss Bass: he's Big, he's bad, and he's hungry. Try not to become his next meal. You'll probably dislike him. He can swallow you whole even if you're fully powered-up! Plus, the land in this world rises and sinks, putting you right within his reach.

Doors, Thwomp Traps, Boo Diddlys and a flooded basement stand between you and BOOM-BOOM. This is a complicated fortress! The doors in the fortress lead to a flooded "back" stage. Most of the doors will just waste your time if you take them, so follow the map carefully.