There are three layouts for the final battle, depending on which arrow you clicked in the map.

All three variations introduce a new enemy weapon, the nuclear strike. This will inflict serious damage to your base, but it will only occur when specific conditions are met. You can minimize damage from the superweapon by spreading your base over a wide area, or by quickly selling structures before the nuke lands. You should have a reserve ready, either through tiberium credits, or an extra construction yard. You can also save and reload the game, as the AI is generally consistent when it flings the nuke.

Also of interest is an alternate ending if you destroy the Temple of Nod using the Ion Cannon. 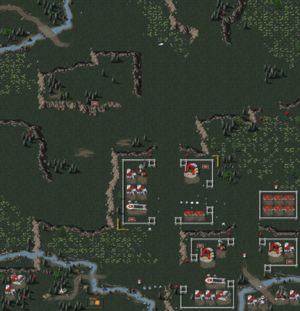 The first of three maps has your MCV start arrive from the north-west corner, escorted by one medium tank. You will be quickly attacked by a flame tank, and will need to keep moving your MCV in circles to avoid damage. There are also two rocket infantry, which will only engage if you either move west from the bridge, or hug the northern edge of the map.

There is a SAM site in the raised section just north-west of the central base.

While the enemy does attempt to flank, there's only two exits from the base - the middle, and the east. You can easily choke the central exit to prevent any flanking attacks, as long as you remember to maintain defenses.

There are two triggers for nuclear attacks, one which is preventable:

The enemy bases have a major weakness. On the east edge of the map, there are six tiberium silos protected only by a concrete wall. If you get six engineers into this, you get plenty of resources, which should be more than enough to build reserve forces once the enemy launches the nuclear strike. Also, capturing these silos also gives you room to serup a forward base, as well as flanking the undefended section of the central base.

Next, surgically remove a few specific structures in the central base. Aim for the SAM sites in the north-east and south-west corners.

If you want, you can target a few barely defended buildings in the south-west. The construction yard and advanced power plant, guarded by two turrets. They are easily destroyed, and destroying or capturing the construction yard should prevent the AI from rebuilding two structures at once.

You may now press the attack against the temple, approaching from the north. Target the obelisk of light with an ion cannon, and engage. Try to destroy the SAM sites in the north-west and north-east corners of the base - if you destroyed the other three SAM sites, you should now have air strikes. Bring your attack slightly west of the bridge, and focus on the construction yard to prevent further rebuilding. Cross the bridge, and target the obelisk with the air strike, and have your forces destroy the Temple of Nod - this will launch a nuke.

If you followed the steps as above while resisting the nuke, all that's left is a mop-up. Target the south-west corner if you haven't already done so, eliminate the three refineries, and you can now eliminate the remaining buildings and units at your own pace. 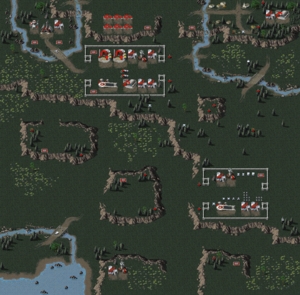 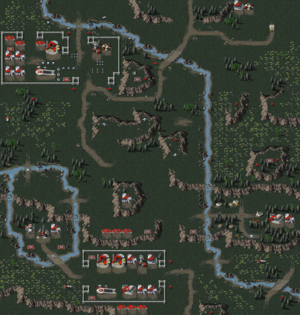